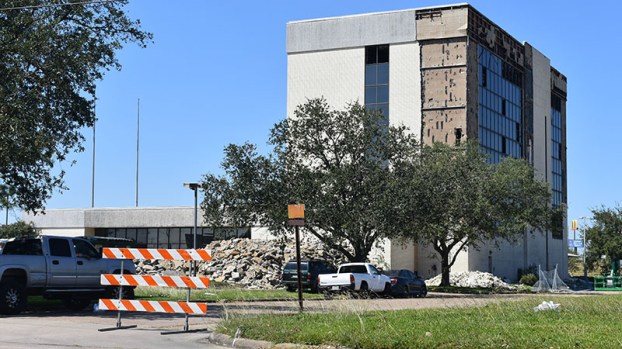 A view of the bank from 39th Street shows piles of rubble and areas where the brick has been striped off the building. (Mary Meaux/The News)

GROVES — A long vacant bank building in Groves is coming down as the new owners are readying to make room for future retail and commercial outlets.

This has been a long time coming, Groves City Manager D.E. Sosa said. 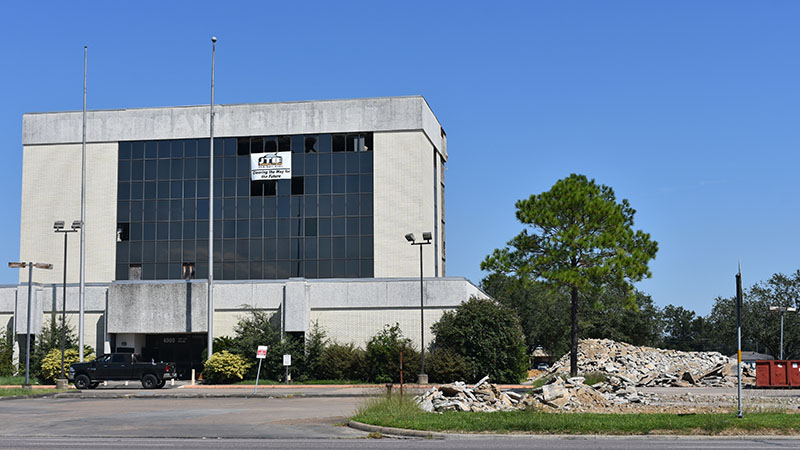 The new owners plan to develop four to five commercial sites in the location and are looking for tenants now.

The former Wachovia Bank/First Bank and Trust in the 4000 block of Twin City Highway has sat vacant since Hurricane Rita in 2005.

Sosa previously said the framework of the multi-story building was twisted during the hurricane, though the first floor was not. From 2005 to Nov. 18, 2010, Wells Fargo operated the bottom floor of the original multi-story bank, and then moved to the newly constructed bank adjacent to it.

An official timeline for the demolition phase has not been made public.

“They’re working now to get it taken down and working with us to re-plat the property to have four to five commercial sites there and are looking for tenants now,” Sosa said. “They’re moving forward.”

The site itself is valuable and potentially some of the best commercial property in the city when developed.

It has great ingress and egress, location and a high traffic count, Sosa said.

The property is valued at $1.4 million, according to the Jefferson County Appraisal District’s tax roll thus generating approximately $33,500 in property taxes.

But it’s the potential sales tax that the city is eying. Retail or a major restaurant at the site would bring in a generous amount of sales tax.

The city of Groves is landlocked and having no major industry in its city limits, must rely on property and sales tax to fund operations.

Two local high school football teams will play their games Thursday due to the potential for inclement weather from Hurricane... read more