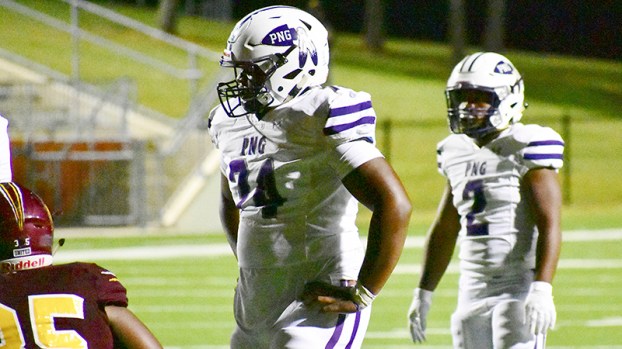 PORT NECHES — Not much can come between brothers.

“There is no one better than the Vaughns,” Faircloth said. “We love them. Landen has done a great job as our left tackle, and Lance is an all-district running back. They have always been wonderful kids, wonderful leaders for our team and some of the hardest workers. We’re extremely proud that they are Indians.”

The twins can also be a bit mischievous, as their coach points out.

“There is some brotherly love,” Faircloth said. “During this interview, Lance just threw a ball and hit Landen in the head with it during the water break. Just like any family, you have your brother’s back when you are on the football field.”

Lance Vaughn said he and his brothers are competitive.

“Football, food and the Xbox get us going the most,” he said.

The two admitted to breaking several Xbox controllers, with the most recent being a couple of weeks ago. 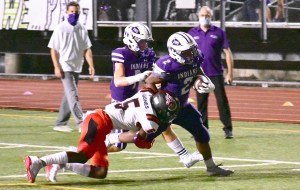 PNG running back Lance Vaughn tries to break away from Memorial defensive back Maleek Jones during a long run in a Sept. 25 game in Port Neches. (I.C. Murrell/The News) 9-25-20

Landen Vaughn said he broke the controller his brother was beating him with at Madden.

Lance Vaughn said he and the eldest brother would always go head-to-head, given they play opposite sides of the ball.

Even with the competitive fire, the brothers say they have each other’s backs.

“I’m always trying to keep him safe out there on the field,” Landen said. “If somebody shoves him after the play, I try to go help him up and talk to the other dude and tell them that isn’t going to happen.”

Lance Vaughn said he knows to not make the person blocking for him angry.

“I just don’t want to make him mad during the week,” he said laughing. “He has to block for me on Fridays, so I can’t make him mad. I need him to block.”

Many know of twins having a connection that can lead to a lot of nonverbal communication between the siblings. The Vaughns said that bond helps them perform better on the field.

“I feel like we have that connection,” Lance Vaughn said. “A lot of the stuff we do, we will do it at the same time and not even realize it. It’s a good connection.”

Both brothers say they pattern their games after recently graduated PNG players who are playing for the Texas Longhorns.

“I have to say my friend Jaylen Garth that just went to UT,” Landen Vaughn said. “I watch a lot of his old film and new film. That is who I watch.”

Lance Vaughn said he watches a former LSU running back, who now plays for the Kansas City Chiefs and a familiar PNG name.

“I watch a lot Clyde Edwards[-Helaire]. He is a real short running back. I also watch Roschon Johnson. He moved to running back and I was teaching him my skills,” he said with a sheepish grin on his face.

While neither of the brothers have scholarship offers at the moment, both said they would like to play college ball.

BEAUMONT — For the second straight week, the Port Neches-Groves Indians staged a scintillating comeback after falling into a big... read more