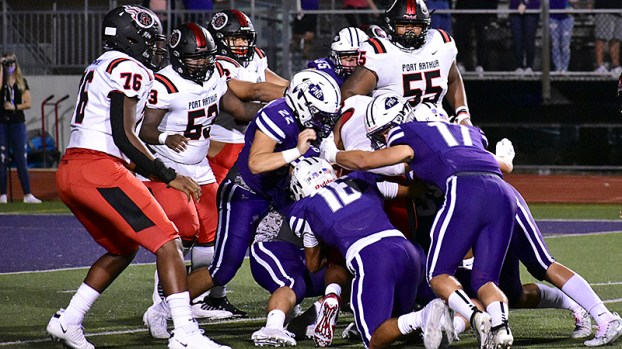 Two local high school football teams will play their games Thursday due to the potential for inclement weather from Hurricane Delta this weekend.

The District 9-5A Division I game between the two undefeated teams was originally scheduled for Friday.

The Port Neches-Groves Indians will also play Thursday night at home against the Tomball Cougars. Kickoff is set for 7:30 p.m. in Port Neches.

Morgan said he and La Porte coach Anthony Renfro made the decision just after noon Tuesday. Both coaches, he said, discussed the possibility of playing the game Saturday, but decided to use that as a backup plan if the weather would be too bad Thursday night.

Morgan said he was not concerned about losing a day of practice.

“I don’t think it matters a whole lot,” he said. “These kids recover fast. They are probably good to play a game today. If at some point you are banged up in the season, it may make a difference. At this point, we are pretty healthy.”

Morgan said his team has an identity that does not change too much based on the opponent.

“We are going to do what we do,” he said. “That is not going to change a whole lot week to week. Defensively, we have a veteran group that can handle that.”

Morgan also said that he prefers to play in clearer weather given that his team wants to throw the ball as opposed to La Porte, which will look to establish a ground attack.

Port Arthur investigators and medical experts have been unable to identify the body of a deceased individual found Friday afternoon... read more