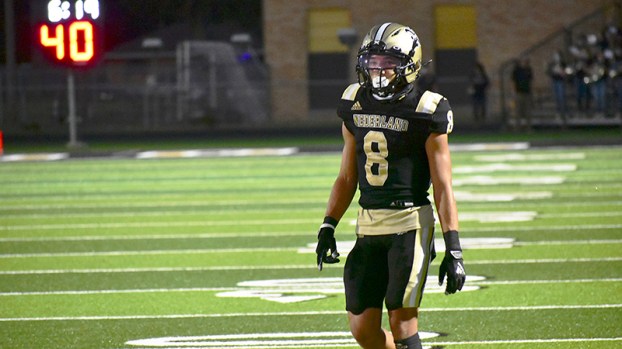 NEDERLAND — During Friday’s 31-28 loss to Lufkin, Nederland defensive back Kyndon Fuselier jumped a route and had a ball hit him in the hands only to fall to the turf.

Most safeties would’ve been content with the breakup, but not the junior.

He believed he should’ve caught the ball that would’ve likely resulted in a pick-six.

“(My teammates) kind of got on me,” he said. “I told them that I would have it next time.” 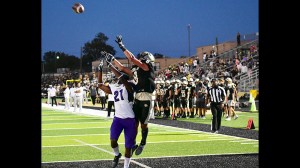 Kyndon Fuselier (8) of Nederland goes up high, juggles and brings down a touchdown pass against Lufkin on Friday. (I.C. Murrell/The News) 10-2-20

Fuselier atoned for his drop by leading the Bulldogs in receptions with nine catches for 119 yards and a touchdown. It’s not easy to get him off the field, head coach Monte Barrow said of the starting safety, receiver, punter and returner.

“If we wanted to take him off the field now, I don’t know that he would let us,” Barrow said. “He is that kind of competitor. He makes that kind of impact on both sides of the ball to where you want him on the field.

Barrow said he and his coaching staff monitor how much Fuselier plays and are always ready to substitute him out if he needs a break.

Fuselier likes getting stops on defense, but he gets the most joy out of getting in the end zone.

“I like being able to shut down the other team, but I like being on offense to score,” he said. “I just like being on the field with my teammates winning. That is the most fun part about the game.”

The junior said playing on both sides of the ball helps him with his game.

“I know the tendencies they are doing, because I can see how they are approaching the receivers,” he said. “On defense, I know what I would do as a receiver, so I am able to see ahead a little bit and lock that down.”

“It’s probably a little harder for him to do all of those things early as we get into game shape,” Barrow said. “He’s as tough a kid as we have mentally. The biggest thing he brings to us is how he practices. He practices to get into that shape and other guys see it. They don’t want to take plays off because they see him and where he is.”

As for that dropped interception, Barrow said the breakup shows how skilled Fuselier is as a defender.

“Actually, at the moment, we thought that was going to be a pick-six,” he said. “When we watched the video, he had to jump to avoid interference. To be able to do that was special in itself. When he did that, the ball was a little low for him. There is not too many times you see that ball touch his fingers and it is not caught.”

Fuselier will look for his first interception of the season against Jacksonville on Saturday.