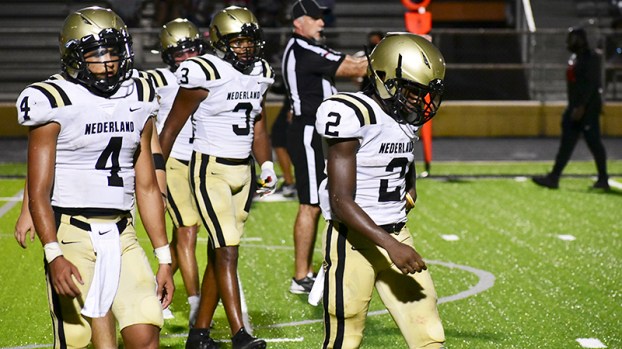 Nederland has dealt with two cancellations before getting to kick off against a newfound opponent in Lufkin tonight. (I.C. Murrell/The News) 9-17-20

NEDERLAND — After six months of practice, a coronavirus outbreak, one scrimmage and two canceled games, the Nederland Bulldogs will suit up for their first regular season game against the Lufkin Panthers (0-1) at Bulldog Stadium Friday.

“Even though we played in game simulation against Memorial, it’s not the same,” he said. “I hope every situation imaginable comes up in this game. We only have two of them before we get to district. I want to see how our team reacts to the ups and downs of a game. You can’t get too excited when something good happens or get too down when something bad happens. You have to stay steady for four quarters and, hopefully, be able to enjoy it at the end of the game.”

Barrow declined to name how many players tested positive for the coronavirus, but said some positions are thinner than others.

“We were already thin with our offense and defensive line,” he said. “We had some things happen early on that had nothing to do with COVD. We had some injuries on the d-line and had a kid move off. On the offensive line, we are thin there. We’ve gotten a few kids back.”

Barrow said this week tests the Bulldogs’ depth, adding he would like to see some players step up.

“This isn’t about getting everyone back for this game,” he said. “We want to get a good four quarters from the ones who can play. Every position coach looks at worst-case scenarios. We have things in place, where certain moves will be made. Something is going to happen, as it does in a football game, and someone is going to get a chance that didn’t think they were going to get a chance. Hopefully, they step up and earn themselves some more looks.”

Lufkin had a hole in its schedule after Nacogdoches canceled its matchup due to positive coronavirus tests.

While the Panthers suffered a 70-32 loss to Tyler Legacy, Barrow said he expects a competitive game against the team that was undefeated in district play last year.

“They are similar to Port Arthur in that they are athletic and physical,” Barrow said. “They have numbers. I think I saw 84 (players) on their roster. Their backfield will probably be the biggest challenge for us defensively. They have a running back that committed to Washington and a quarterback that is being looked at by Hawaii. Defensively, they have some big guys up front that really swarm to the football.”

Kickoff is set for 7 p.m. Friday at Bulldog Stadium.

How does Blake Bost excel as a leader? For one, “he makes the people around him better”