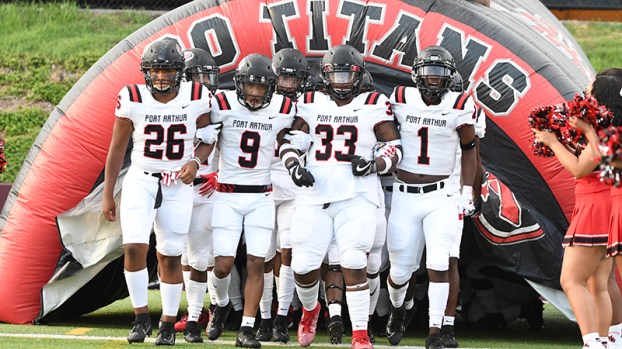 MONT BELVIEU – Jah’mar Sanders turned in a stellar outing, rushing for three scores and passing for the game winner in leading Memorial to a come-from-behind 27-23 win over Barbers Hill in non-district football action Friday night at Eagle Stadium.

Sanders was perfect on the final drive for the Titans, completing four attempts. He connected with Ilijah Williams for 13-, 9- and 33-yard completions and then hit Tony Brooks for a 12-yard scoring strike with 1:29 for the go-ahead score.

Memorial held the Eagles scoreless in the second half, overcoming a 21-14 halftime deficit with 13 unanswered points.

BH (0-2) had one last chance to score at the end, taking over with 1:29 remaining. Jamond Francis intercepted Brent Holdren to seal the win for the Titans.

BH received the opening kickoff, but it was the Titans who grabbed the early momentum. On third down, quarterback Brent Holdren fumbled while scrambling out of the pocket, which was recovered by Memorial’s Jahiem Cooper.

In trying to run down the clock to end the game, the Titans were tackled in the end zone for a safety with 20 seconds left. The Eagles returned the ensuing free kick all the way to the Titans 13. Holdren completed a pass to the sideline, but the receiver was tackled in bounds and the clock ran out before the Eagles could run another play to end the game.

That set up the Titans with good field position at the BH 40. Adrian Hayward had a 10-yard reception and followed with an 18-yard run to give Memorial first-and-goal at the 4. Jah’mar Sanders called his own number on for a 2-yard TD run to give the Titans a quick 7-0 lead.

BH answered right back with a seven-play scoring drive of its own. Garret Hagler carried four times on the drive for 40 yards, including a 14-yard TD to cap the drive. Holdren also had three rushes for 18 yards. That tied the game at 7-7 with 9:09 left in the first quarter.

Memorial responded with a long drive that was 14 plays long and took the Titans all the way to the BH 5. But that’s where the drive stalled, and Sanders’ pass fell incomplete on fourth-and-goal from the 7.

The Titans defense came up with a stop on the Eagles ensuing drive. The Titans put together a quick scoring drive to reclaim the lead at 14-7. Sanders connected with three separate receivers: Ilijah Williams for 17 yards, Tyrence Augusta for 16 yards and Hayward for 14 yards. Sanders capped the drive with a 3-yard plunge.

Once again, BH had an answer with its own scoring drive that tied the game at 14-14. It looked like the Memorial defense had another stop, but on fourth down BH executed a fake punt with Maddox Malone completing a pass to Ashton Hamby for 46 yards.

A personal foul penalty on the Titans put the ball at the 8. Canden Grogan scored three plays later on an end-around from 6 yards out.

The Eagles defense forced a quick three-and-out by the Memorial offense. On the ensuing drive, Holdren rushed six straight times, including drawing a facemask penalty after an 11-yard scamper. On third-and-14, Holdren hit Hagler on a screen pass that went for 14 yards and a score to give BH its first lead of the game at 21-14.

BH looked prime to add to the score as it forced another Memorial punt late in the quarter. A succession of penalties forced the Titans to punt from their own 2, which resulted in great field position when Memorial’s 26-yard punt was returned to the 18.

The Titans defense came up with a big stop. After Hagler’s 14-yard run put the ball at the 5, BH had a false start penalty and Holdren was sacked for a five-yard loss. On fourth down, Malone was wide left on a 28-yard field goal attempt to keep the score 21-14 at halftime.

Both teams squandered opportunities in what turned out to be a scoreless third quarter. Sanders was intercepted on a deep pass on the Titans first possession of the third quarter. After both teams were forced to punt, Memorial’s Jaylon Guilbeau intercepted Holdren in the end zone to thwart the only real scoring threat in the quarter.

Jah’mar Sanders took over the game on the Titans’ final drive. With the game tied and Memorial starting at its own 33 with 2:07 remaining, Sanders completed four straight passes, the last of which was a 12-yard scoring strike to Tony Brooks with 1:29 left in the game.

Jah’mar Sanders who was a one-man wrecking crew for the Titans. He completed 21-of-34 attempts for 264 yards and a touchdown. He also ran 58 yards on 13 carries and three scores.

Memorial plays on the road at La Porte.

Barbers Hill has two weeks off before returning to action with its district opener on Friday, Oct. 23, at home against Kingwood Park.

NEDERLAND — After six months of practice, a coronavirus outbreak, one scrimmage and two canceled games, the Nederland Bulldogs will... read more