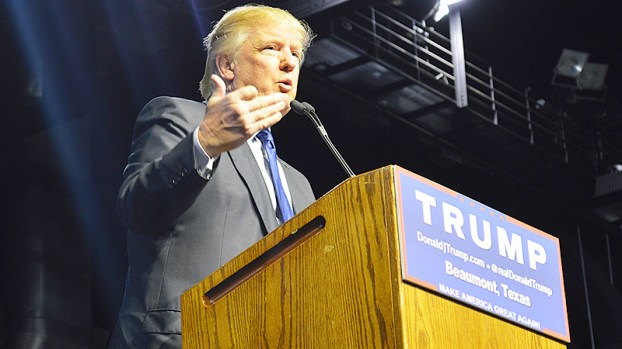 Donald Trump speaks to a crowd at the Montague Center on the Lamar University campus in Beaumont during a campaign stop in 2015. (Mary Meaux/The News)

Local leaders weren’t surprised at the news that President Donald Trump and First Lady Melania Trump tested positive for COVID-19 as they are in contact with many people due to the nature of the job.

Likewise, these leaders will continue their due diligence in keeping themselves and others safe.

Porter said officers take reasonable precautions to stay safe when out, wearing a mask, washing hands and trying to social distance when they can, but sometimes the nature of the job makes it difficult.

“We take reasonable precautions not to spread or catch it,” he said.

Groves Fire Chief Lance Billeaud said the fact that the president and his wife tested positive for the illness shows nobody is exempt from the virus and it can affect anybody at any time.

“I have been vigilant wearing masks myself but I know people who wear masks and are vigilant and it still affects them too,” Billeaud said.

Billeaud wears a mask, keeps his social distance and tries to stay away from large crowds the best he can.

“I don’t know I can do any more. When I go to football games I wear a mask like I’m supposed to,” he said.

The illness did strike in his family — his wife had a mild case of the virus and he and his son were quarantined at home for 14 days but did not contract the illness.

“I know people who have had severe cases and some who had mild cases,” he said. “There’s no rhyme or reason who gets mild or severe as I’ve seen both personally.”

Billeaud also added he will be one of the first in line to get a vaccine when one becomes available.

Port Neches Mayor Glenn Johnson said his thoughts and heart went out to the President and First Lady upon hearing the news and he hopes they won’t have any complications.

Johnson doesn’t have any close friends that have contracted the illness but is not taking any chances — he’s wearing a mask, social distancing and brings along hand sanitizer.

He said he is not going to change his policy regarding precautions. In fact he is set to attend a grandson’s small wedding, where precautions will be taken including the request all guests wear a mask.

Jefferson County Precinct 3 Commissioner Michael Sinegal said he prays for Trump and his wife as he always has done and regardless of policies wouldn’t want them to be impacted by COVID.

He also worries about catching the illness.

“Like I tell everybody I’m five for five. I’m African American. I’m not ashamed to admit I’m overweight. I have diabetes, high blood pressure and am over 60 so I take COVID very seriously,” Sinegal said. “If I contract COVID, my chances of beating it are slim from what doctors say. I will continue to social distance, wear a mask, enforce the mask order in the (county) courthouse and I am still not going to parties or different things.”

Sinegal, who said he is not a fan of the president’s political policies, compared Trump’s previous COVID reactions to children who often have to learn the hard way.

“I think the whole world is watching America right now,” he said. “We’ve always been one of the strongest nations in the world and I think we will be again. You can say a lot of things, but people watch what you do. It’s up to us as Americans to bond and be the beacon of light for the world.”

Tropical storm likely; so is eventual path somewhere into the Gulf of Mexico