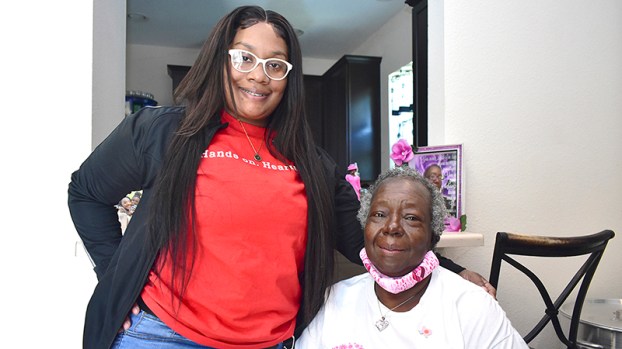 I.C. MURRELL — It takes a team to beat cancer

Each October, the National Football League, like many other organizations, raises awareness of breast cancer through its “Crucial Catch” initiative.

In recent years, the league has brought the fight against other cancers to the forefront, even releasing a logo including a NASCAR-like spectrum covering 14 colors representing different cancers.

October is Breast Cancer Awareness month, so NFL players tend to dot our television sets with notes of pink on their wristbands, socks and shoes to let cancer fighters know it takes a team to win the fight.

“No, baby, I don’t need you to feel sorry for me. If anything, I need you to pray for me and be sincere about that prayer because I have a fight on my hands.”

This is the second year Port Arthur Newsmedia is highlighting stories of breast cancer survivors each Friday during the month of October, hence the mastheads in today’s edition gone pink. The stories of courage and survival are hard to imagine without hearing them from these individuals and those who stood by their sides.

They put the stories into words, moving as they are. We write them out, moved as we are.

Lovie Austin’s story is nothing short of moving.

A Port Arthur resident since she was 2, Austin worked at the old Farm Royal seafood restaurant on Memorial Boulevard, where Raceway now stands, she said. She then went to work for the Port Arthur Independent School District as a bus driver before taking a medical retirement in 2002 because of knee trouble.

That’s just a little personal background. What was to come 16 years later is just unimaginable.

No parent should have to imagine seeing a child die at any point before it’s the parent’s time to go. Lovie’s one and only child, Tamara, suddenly left us two days before Lovie’s birthday — when the autopsy was performed.

Six months later, Lovie found out she had breast cancer. Her surgery was performed one year to the day of her diagnosis.

Today is one year since she began chemotherapy.

Body pain should be enough hardship, but Austin is one tough warrior whose faith was tested. She passed with flying colors, if you will.

To all the doctors and medical facilities, as well as charities like the Julie Rogers Gift of Life, who lead our toughest warriors in the fight of their lives, thank you for teaming up. You performed as one heartbeat, just as our high school football teams will tonight.

When you see notes of pink on a football field this month, remember that they stand with those impacted by Satan’s disease. We all salute those who fought and remember those we lost to breast cancer — any cancer.

And let us never forget, everyone who fights has a story to tell. Lovie Austin’s just may inspire the next fighter up.

Two men charged with stealing briskets meant for a police officer’s funeral, among other items, were indicted this week by... read more