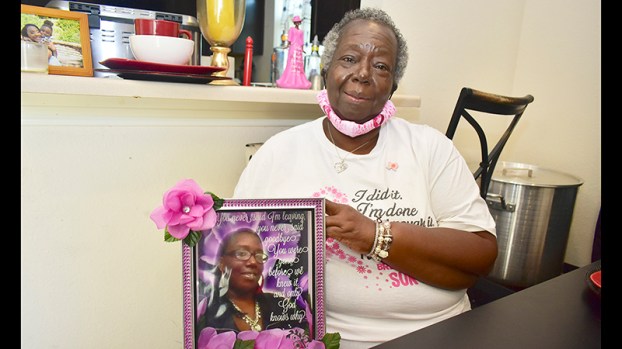 Lovie Austin holds a framed photo of her daughter Tamara Austin, who died two days before Lovie’s 63rd birthday. The inscription in the photo reads: “You never said I’m leaving, you never said goodbye. You were gone before we knew it and only God knows why.” (I.C. Murrell/The News) 9-30-20

Today marks one year since Lovie Austin began treatment for breast cancer. But the Port Arthuran’s journey in facing adversity didn’t begin with her diagnosis.

It began on Dec. 8, 2018, two days before her 63rd birthday. Her daughter, Tamara Austin, was feeling ill and went to a hospital. 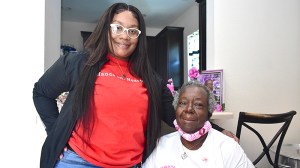 An autopsy performed on Lovie’s birthday revealed a blood clot rushed from Tamara’s leg into her heart and killed her instantly, Lovie said. Tamara was 43.

“She’s a sweetheart. She was my only child,” Lovie said.

She began doing regular mammograms in her early 50s through the Julie Rogers Gift of Life program and also performed self-examinations.

“I was always taught you do a self-exam,” the elder Austin said. “My granddaughters thought that was funny because they were saying I was playing with my boobies. I noticed I had a knot.”

A mammogram the prior year did not reveal any signs of cancer, she said. This time, she noticed a knot.

“I thought it was a cyst that would go away,” she said. “I waited about a couple of weeks, and it didn’t go away. So, a little bell went off in my head, saying I need to go get myself checked. I immediately called my doctor, told him what was going on and asked him if he could schedule a mammogram. Once the mammogram was done, I got the test results and they said I needed further tests to be done.”

Lovie began chemotherapy on Oct. 2, 2019, and finished it March 15 of this year. By that time, coronavirus was declared a pandemic, and Austin had to guard herself against another potential battle for her health.

“I had to make sure I was extra careful because my immune system was low,” Lovie said. “Once they pump all these drugs into you, the medication doesn’t know the difference between a good cell and a bad cell, which is good and which is bad. They attack every cell in your body, so there are days I would be weak, I would be in pain, but I kept on. I kept pushing.”

During chemo treatments — five days per week for four weeks — the former restaurant employee and retired school bus driver lost her sense of taste, and her fingernails and toes turned black. It was all part of the process, she explained.

“But you know what? I never gave up,” she said.

Lovie says she feels “a little tired” after completing radiation and is dealing with pain in her underarm from an operation where doctors went in to remove 20 lymph nodes and the tumor. She underwent the surgery this past June 29 — one year after the diagnosis.

“For me, the only thing that was tough about it was having to lay on this hard table and put your hands over your head and lay in that position for about 20 minutes,” Lovie said.

Lovie’s family was determined to not let her fight cancer alone.

“It was … stressful, actually made me stronger than what I thought I was,” Simpson said. “It was a long journey. I couldn’t say nobody can ever understand the pain we went through. Between the six months of my mother dying and finding out [Austin] has cancer, I was like, that was the worst thing we could think of, but it made me stronger than who I thought I really was.

“It made me realize that life is never to be taken for granted. You never know what could happen.”

Simpson and her sister, along with Lovie’s siblings (one brother and four sisters) wore T-shirts in support of Lovie’s cancer fight. Calling herself “the backbone,” Simpson took it upon herself to make sure no one saw the emotional toll a mother’s death and grandmother’s fight for life took.

“You can’t let them see you down,” Simpson said. “You have to grind every day, smile, you stay strong for them. You show no weakness. You have to be that person to show them, we’re going to get through this.”

“Them” refers to all her family members.

“As long as we’re being strong, she’s going to be fine,” Simpson said.

Not only that, her grandmother is a survivor.

When Lovie learned of her diagnosis, she asked God a question.

Lovie dared to ask the higher power: “Are you testing me to see where my faith lies?”

“I said, ‘My faith lies in you,’” she continued. “I know what you can and what you have done for me. All I ask is that you continue to strengthen me because breast cancer is a journey that nobody — not just breast cancer, any form of breast cancer — asks for. It’s just a journey, a road we have to travel. If you trust and believe in God, He’ll take you through this here. And through your journey, you have to have good support … good support.”

Lovie’s faith has not wavered. And her prayer to be strong for her granddaughters has been answered as well.

A Port Arthur man police believe sexually abused a child for almost four years and shot the child when she... read more