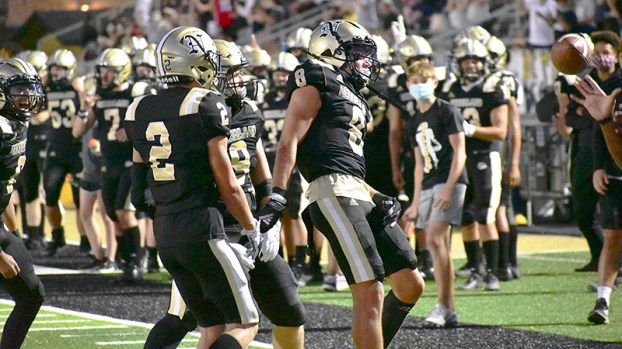 Kyndon Fuselier (8) of Nederland tosses the ball back to an official after juggling in a touchdown pass in the first quarter. (I.C. Murrell/The News) 10-2-20

NEDERLAND — A Nederland comeback came up short as the Bulldogs fell 31-28 to Lufkin at Bulldog Stadium Friday.

With just over 2 minutes to go, the Bulldogs (0-1) forced Lufkin (1-1) to turn the ball over on downs on the Nederland 15. After converting one first down, the Bulldogs were unable to go any further, getting sacked on fourth down to secure a Panthers win.

Lufkin opened up the game with an 11-play drive that ended with a 25-yard field goal. 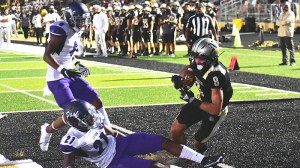 Nederland responded with an eight-play drive of its own, capped by a 13-yard touchdown pass from Rene Cunningham to Kyndon Fuselier with 5:24 left in the first quarter.

Both teams exchanged multiple punts before Lufkin returned fire with a 57-yard bomb from Jordan Moore to AJ Montgomery to give the Panthers a 10-7 lead with 8:46 left in the first half.

On the ensuing drive, the Bulldogs drove 73 yards in just over 3 minutes to take a 14-10 lead off a 1-yard run by Cunningham with 5:33 left in the first half.

On the following drive, Lufkin running back Caleb Berry got going with runs of 19 and 35 yards, with the latter getting him into the end zone to give the Panthers a 17-14 at halftime. 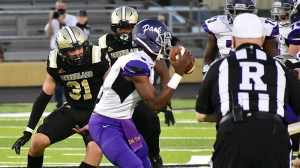 Nederland went three-and-out on the first drive of second half. Fuselier bobbled the punt before being tackled on his own 13-yard line. Two plays later, the Panthers took a 10-point lead on a 1-yard run.

After Nederland punted on the next drive, Lufkin ran six plays to get in the end zone once again to make the score 31-14 with 5 minutes left in the third quarter.

Nederland would score two more touchdowns, but could not put together a tying or winning drive.

“They did all that we hoped they could do,” Nederland head coach Monte Barrow said. “All of the things they could control as far as effort and leaving it on the field, thought they did a tremendous job of that. With what they gave us tonight, we have a lot to be excited about. We have a lot to work on, and we will do that starting next week.”

The Lufkin offensive line, who opened up running lanes all night, allowing the Panthers to rush for 231 yards on 36 carries.

Cunningham threw for 291 yards. Running back Josh Mayzck and Fuselier were his main targets. Fuselier collected nine catches for 119 yards. Mazyck had three catches for 77 yards. Mayzck also had 13 carries for 20 yards.

Barrow said he was impressed with Cunningham, who only practiced one day last week as he recovered from the coronavirus.

“He wasn’t too shabby for coming back from the virus yesterday,” Barrow said. “He had won the starting job earlier. We told our seniors that we weren’t going to punish them for having this virus. They are not guaranteed the next game. We were proud of the way he came out and led our football team.”

Nederland will travel to Jacksonville. Kickoff is set for 2 p.m. Oct. 10. The Panthers will travel Mustang Stadium to take on Magnolia West.

NEDERLAND — After six months of practice, a coronavirus outbreak, one scrimmage and two canceled games, the Nederland Bulldogs will... read more