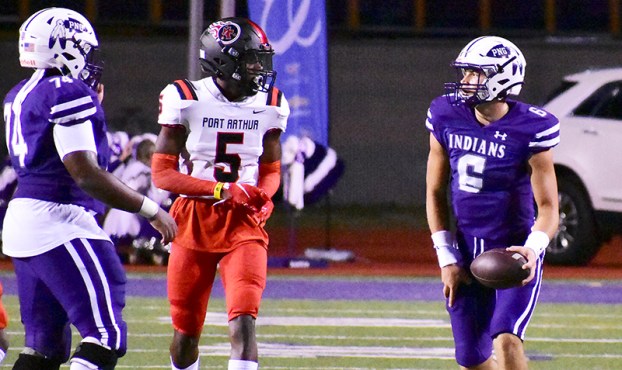 How does Blake Bost excel as a leader? For one, “he makes the people around him better”

PORT NECHES — Port Neches-Groves quarterback Blake Bost had some rather large shoes to fill after Roschon Johnson graduated and moved on to play for the University of Texas following the 2018 season.

Bost saw limited time at the position his sophomore year when Johnson was injured. Last season, Bost led PNG to a 7-4 record, including a 27-21 win over Nederland in the Bum Phillips Bowl.

Since last season, PNG coach Brandon Faircloth has trusted Bost with the reins on offense.

“It is like night and day,” Faircloth said of Bost’s progression. “He has every positive attribute you would want in a quarterback. He is competitive. He is intelligent. He is extremely talented and a leader. When you are those four things, you have a chance. Not only is he those things, he makes the people around him better. ”

Faircloth said he was proud of the way Bost kept his head up while PNG was trailing 20-0 against Memorial last week. Even after a few costly interceptions, Bost continued to uplift teammates. PNG stormed back to force overtime, where the Indians ultimately lost 38-32 to the Titans.

“Everyone got to see his leadership,” Faircloth said. “He has experience. He’s been in those kinds of fights and tough games. Being able to lead our team back from 20-0, I’m proud everyone got to see that resilience and grit.”

The senior quarterback said he is more vocal this year.

“I feel like I have been a lot better at running the offense and being a better leader on the field,” he said.

Bost said he looks up to future hall-of-famers Drew Brees and Tom Brady. The lefty quarterback’s ability to scramble is better than his two idols, who are mainly known for making plays in the pocket.

Bost had 14 carries for 57 yards and two rushing touchdowns against Memorial.

While he has not yet made a decision on where he will play college ball, Bost currently has scholarship offers from Lamar University, University of the Incarnate Word and Arkansas State University.

After staving off a Port Neches-Groves comeback in an overtime win, the Memorial Titans will go back on the road... read more