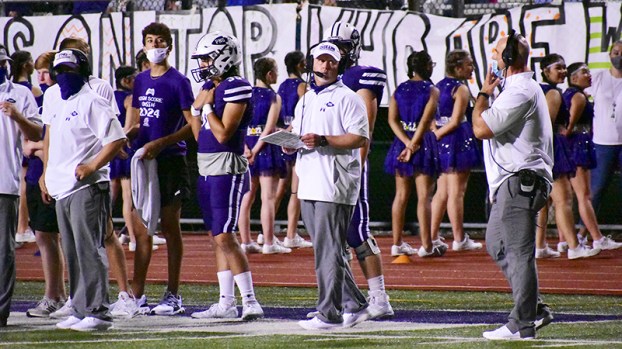 PNG head coach Brandon Faircloth, holding notes, listens in on a call on the sidelines during the Sept. 25 home game against Memorial. (I.C. Murrell/The News) 9-25-20

PORT NECHES — Port Neches-Groves will be looking for its first win of the young football season when the Indians take on United on Friday in Beaumont.

After erasing a 20-0 deficit against the Memorial Titans, only to lose 38-32 in overtime, PNG’s Indians will play against a Timberwolves team that struggled against West Brook in a scrimmage last week.

West Brook poured on the points in a 45-10 win over the Timberwolves.

While many coaches use non-district games to prepare their respective teams for the rigors of district competition, both coaches said they would like to get their first win of the season.

“We want to continue to get better,” PNG head coach Brandon Faircloth said. “Against Memorial, we were really proud of some things that happened in that game, but there were some things we have to improve on.”

After giving up 341 yards rushing to the Titans, PNG will look to improve its tackling, Faircloth said.

“We have to work on some fundamentals, really,” he said. “We want to take a step forward this week.”

United head coach Marcus Graham said his team has only a handful of seniors on either side of the ball.

“We wanted that scrimmage (against West Brook) to get some continuity with the kids,” he said. “We have different kids playing different positions than they played last year. We are extremely young. We have four seniors back on offense and maybe four on defense.”

Graham said several players on the team haven’t played varsity snaps in a live game and he is hoping they can shake the Friday-night-lights jitters.

“We got a little taste of it against West Brook, but hopefully they got that out of their system,” he said.

“Their quarterback is great,” Graham said. “He has a great arm and knowledge of the game. He gets the ball out really quick. They have a system in place and work it really well, so we will have our hands full.”

“They also do a good job of playing assignment football on defense,” Graham said. “They do a good job of being where they are supposed to be. That’s what we saw against Port Arthur. We can’t have those type of mental mistakes on our side of the ball.”

Faircloth said he wanted to play Memorial and United because he knew they would push his team to be better.

“They are really well coached,” Faircloth said. “Coach Graham does a really good job. He is brand new there, but he has done a good job putting their team together. They are sound and play fast. They are physical and that have really good football players. It’s going to be another tough test for us and something that we need to have.”

After staving off a Port Neches-Groves comeback in an overtime win, the Memorial Titans will go back on the road... read more