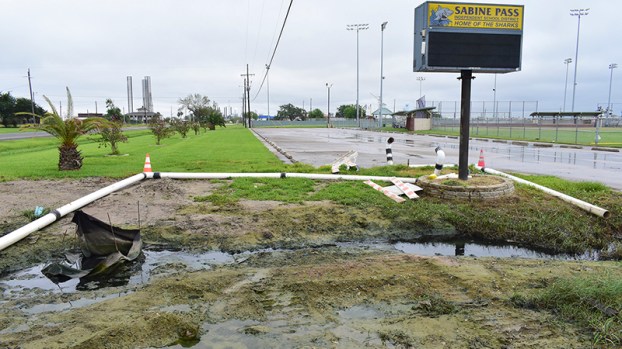 Raw sewage surfaces on the Sabine Pass School surface on the corner of 11th Street and Texas 87. (I.C. Murrell/The News) 9-28-20

SABINE PASS — Soon as school resumed following a voluntary evacuation order for Tropical Storm Beta, Sabine Pass School faculty members and students, as well as the school district’s residents, were greeted to an unwelcome sight in the middle of campus.

Raw sewage surfaced in a hole encroaching the corner of a street connecting the school to its athletic complex and a highway going to Sea Rim State Park.

“You’re talking about people driving or walking by or kids riding their bikes in the community,” said Andrew Bates, Sabine Pass’ high school principal. “The kids are going across to the complex. When it’s open like that, anything can happen.”

The storm was reduced to a tropical depression by the middle of the week.

“It definitely looked larger than anything we noticed before, and there was nothing protecting people from it,” Bates said. 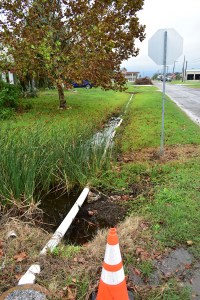 A water line is exposed as a result of pipe-bursting in the Sabine Pass area. (I.C. Murrell/The News) 9-28-20

Bates said sewer work has been done on campus and nearby residential areas for about two years, but the sewage and standing water in other locations have exacerbated mosquito problems. The school has called on Jefferson County Mosquito Control to contain the insects.

The sewage out in the open, officials say, is a safety hazard for those who walk or drive down 11th Street, which crosses Texas 87.

“It goes right up to the road [11th Street] and into the road, so you have concerns about people driving into it because you have no real markings,” Bates said, although new cones have been placed around the hole.

An old sawhorse and old cones could be seen resting in the massive hole, located in front of the school district’s marquee.

Port Arthur City Manager Ron Burton confirmed sewer lines in the area have been exposed as a result of pipes bursting, but he added the city is not neglecting its work.

“The tides were high last week,” Burton said. “You had a storm surge and the water table was high. All the water that came up from the storm — you know Sabine Pass is below sea level — the water has been infiltrated because the manholes are in the ditches. You have that infiltration of water coming in, so it pushes up the sewer. We have people right now who are doing pipe bursting in order to remedy the situation. They have always been on site.”

Storm surges of up to 4 feet were predicted from Beta.

Burton said city workers have not left Sabine Pass in the last six to eight months but have had to pause work in the event of weather events involving water.

“It’s not a neglect of city equipment or neglect of the lines,” Burton said. “It’s all because of gravity and the water table. The impact has a high water table.”

Burton did not offer a timeline for resolving the sewage issue, but he said work can be completed quickly if the weather provides long periods of nice, dry conditions.

“If it’s raining, you have to stop,” Burton said. “You’re always fighting against nature.”

Low lighting in the area provides another obstacle to the sewage issue on 11th Street, Bates said, although the campus installed LED poles facing the main building.

“There are not a lot of lights out here and it gets dark at night,” Bates said. “There’s hardly anything telling people there’s a huge dropoff literally coming into the roadway, not to the side of the roadway but coming in and slowly compromising the roadway itself.”

Sewage and drainage issues are nothing new to Sabine Pass. A 2017 episode of the Animal Planet series Lone Star Law featured a Texas game warden capturing a mother alligator and her babies on campus.

Burton said the sewage issue and related projects would be addressed as long as necessary.

“It’s a project that has to be undertaken, weather permitting,” he said.

NEDERLAND — The Nederland City Council is waiting before deciding if a more significant reopening of local amenities is warranted.... read more