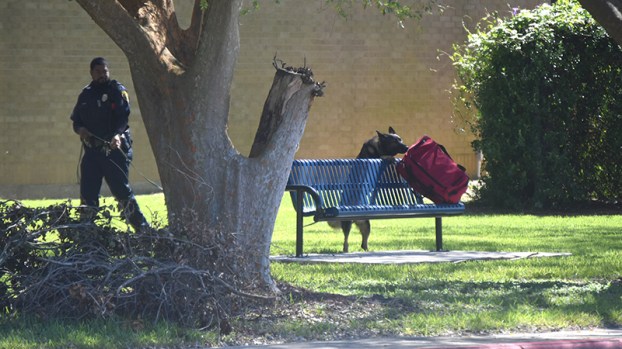 A call of a suspicious package at the Port Arthur Public Library lend to police, fire and a bomb dog arriving on the scene Wednesday afternoon.

Library director Steven Williams said his maintenance department informed him there were two bags outside the library, one on a bench and the other in front of the library.

The homeless population periodically visits the area but they will usually place their belongings out of sight, he said. 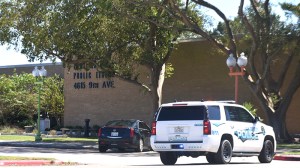 A police unit blocks the entrance to the Port Arthur Public Library after a call of two suspicious packages on Wednesday. (Mary Meaux/The News)

Out of an abundance of caution, Williams called the police department shortly before 2 p.m.

“We didn’t expect anything dangerous, but I’d rather be safe then sorry, so I made the decision to call the police department, who in turn called the fire department,” Williams said.

The building was evacuated temporarily as first responders worked the scene and Cpl. Kendrick Hartfield with Beaumont Independent School District and his K9 partner, Bleu, performed a check.

Hartfield and Bleu, a German shepherd, were seen walking the perimeter of the library grounds before going toward the front of the building at 3601 Cultural Center Drive.

The all-clear was given about an hour later.

A Port Arthur fire captain on scene confirmed the suspicious item was a backpack with textbooks but emergency officials wanted to check the area and evacuate the building to investigate.

Keeping employees, patrons and citizens occupying the library safe is important and the reason Williams made the call.

“I’d rather it be like a big show and nothing happen, then no show then something horrible happens to our employees and city,” he said. “And we are thankful to the police department and fire department in their due diligence in keeping us safe.”