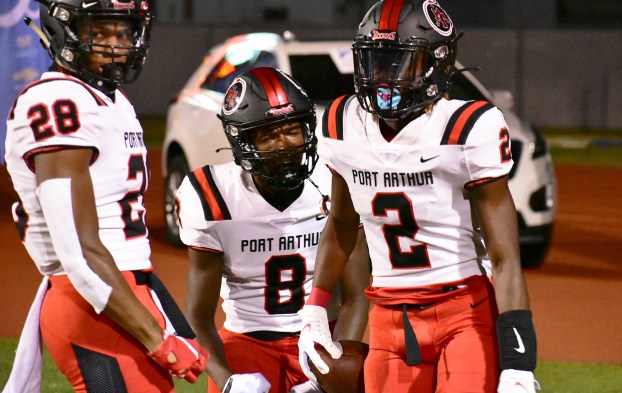 Memorial’s Tony Brooks (8) is fired up after a touchdown run by Tyrence Augusta (2) in the first quarter as Adrian Hayward (28) looks on against PNG on Friday in Port Neches. (I.C. Murrell/The News) 9-25-20

Tony Brooks was listed as a quarterback on the Memorial Titans’ depth chart.

After spending the a limited offseason learning the ins and outs of playing wide receiver, Brooks caught the game-winning touchdown in overtime against Port Neches-Groves on Friday.

Following a PNG fumble in overtime, Memorial took over with a chance to win the game. After a penalty pushed the Titans back to the 33-yard line, quarterback Jah’mar Sanders found a wide-open Brooks, who strolled in for a walk-off score.

“It felt good,” Brooks said. “There was a lot going through my mind. I wasn’t sure if I was going to catch it or not. I just knew to trust myself.”

Brooks said his time as a quarterback helps him see the entirety of the defense and not just his individual matchup.

“I’m able to see where I need to get on my routes to get the ball in openings,” he said.

“Tony is an unbelievable kid and program guy who bought in this offseason,” Morgan said. “He wanted to help the team. He went and ran track and got into the weight room. I think he started taking football more serious. You can see it on the field in the last few weeks.”

Morgan said Brooks had a strong showing during the Nederland scrimmage, too, which was the first time he saw him play live receiver.

According to Morgan, Brooks was good in practice but “you never know if someone will pan out.”

“They can look good in practice, but playing a game is different,” the coach said. “He’s a big guy that catches the ball well with his hands. He’s super, super smart, too. He’s been one of the bigger surprises.”

Morgan said the coaching staff is working to find more ways to get Brooks involved each week.

“He understands what we are trying to do and takes coaching well,” he said.

Brooks looks up to Dallas Cowboys rookie receiver CeeDee Lamb, who was drafted in first round in the spring.

“I just like how he plays,” Brooks said. “I started watching him in college. I like how he is an all-around receiver.”

When pressed on any individual goals Brooks had for the year, the receiver kept it about the team.

“I just want to help my teammates and get to where we are trying to get to, which is state,” he said.