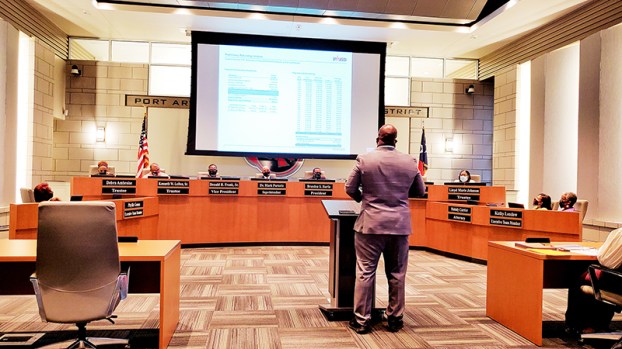 Clarence Grier with RBC Capital Markets provides information to the Port Arthur Independent School District board of trustees about the bond market during a September 2020 meeting. (Mary Meaux/The News)

Port Arthur Independent School District is banking on the refunding of bonds to help increase the debt service fund balance as it looks to make the final payment to Motiva Enterprises over a taxable valuation lawsuit.

Clarence Grier with RBC Capital Markets provided information to the board of trustees Thursday, saying now is the time to do this as there is confidence in the bond market.

Phyllis Geans, assistant superintendent for business and finance and CFO of the district, said Motiva appealed its taxable values for the refinery for the 2018 and 2019 tax years.

Motiva and the Jefferson County Appraisal District entered into settlement agreements for two tax years. Under the agreement, the 2018 taxable value for Motiva was reduced from $2.872 billion to $1.794 billion for a reduction of $1.087 billion.

The 2018 reduction, Geans said, resulted in a refund of $8.5 million, which is to repaid to Motiva in two equal payments in May 2020 and October 2020. The May payment has already been made, and the October payment will be made within the next few weeks.

“The biggest part will come from our general fund and a smaller amount, $895,000, will come from our debt service fund balance,” Geans said. “Back in the April-May timeframe, our debt service fund balance was around $1.5 million and this will reduce it again by $895,000 but the beauty of what we’re doing with the refunding bonds is we’re hoping the refunding will help us try to get our fund balance back. We need to be prepared for the next wave of reductions.”

The “next wave of reductions” refers to the fact the district has been notified Motiva has filed a lawsuit to protest its 2020 tax assessed values. Geans said in an earlier interview, assuming things work as predicted, there will be no impact of the M&O (maintenance and operations) budget but will have an adverse impact on the I&S (interest and sinking) collections.

Trustee Debra Ambroise knows the taxable valuation disagreement with refineries is an issue the district has faced before and will face again, but the question is when or if it will stop.

“It is an ongoing process because I know we give the refining industry here in Port Arthur lots and lots and lots of money,” Ambroise said. “At some point the reality is going to have to set in, you need to help us help our children.”

PAISD Board Vice President the Rev. Donald Frank Sr. wants a solution to the problem, saying the district has written letters and talked to legislators. He has gone to the legislative meeting of the Texas Association of School Boards.

But this — refineries protesting valuations — is not just a PAISD issue. He said there are many other school districts that face this.

“Especially those down in the valley where brown children and black children are being affected,” Frank said. “The question I think we need to ask, I’m not pontificating, I’m not putting anyone on blast, but we have got to find a way to enter into some kind of agreement and partnership with Valero and Motiva and stop the bleeding.”

A number of years ago PAISD settled a lawsuit with Valero for repayment of taxes.

Frank said he believes the refining industry doesn’t fully understand the damage they are doing to the children of Port Arthur.

“When we are trying to educate children who come to our district into speaking English; when we’re talking about children of poverty who are in our school district as well — they do not fully understand what they are doing,” he said.

Frank added it is only Valero and Motiva that are protesting taxable values.

Total Refinery is not doing this in the Port Neches-Groves Independent School District, he said.

He called out Jefferson County Commissioners, asking why there is not language added when agreements are made with those entities that helps the school district.

“There is a loophole in the law,” he said. “We understand the law. Something has to be done.”

A Jefferson County grand jury has handed down indictments for felony theft to two Nederland men and a Port Neches... read more