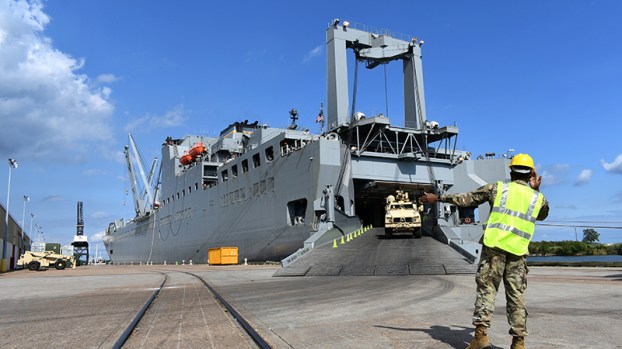 Army PFC Martavius Douglas, a Cargo Specialist with the 368th Seaport Operations Company, directs a military vehicle as it drives off the U.S. Naval Ship Fisher at the Port of Port Arthur on Saturday. (Mary Meaux/The News)

The steel grey U.S. Naval Ship Fisher docked at the Port of Port Arthur, along with numerous soldiers, is in town as part of a deployment-readiness exercise. 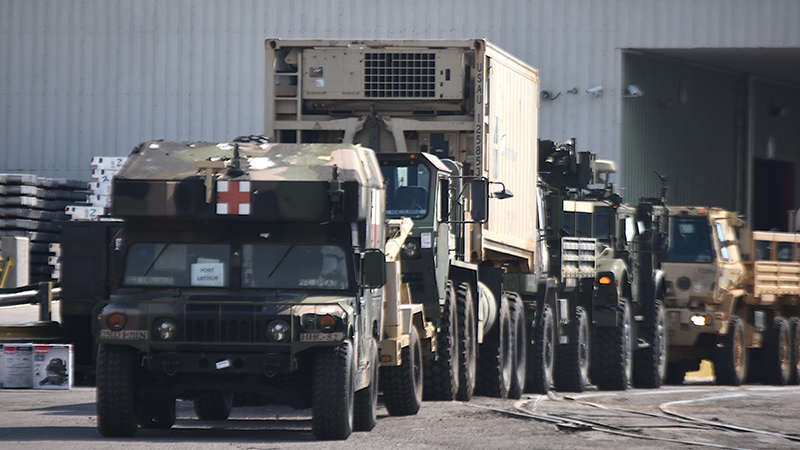 Military vehicles are lined up at the Port of Port Arthur as part of a training exercise. (Mary Meaux/The News)

This means the Fisher traveled from the base in Hawaii to the Port of Port Arthur, where soldiers are unloading various pieces of equipment, such as vehicles.

They inventory each item and go through U.S. Customs at the Port as any other vessel would do.

Vehicles and items are sent to a staging area in preparation for the Joint Readiness Exercise.

“Some of our objectives that we have here are to help discharge the cargo that you see coming across for one of our infantry combat teams that was alerted and put through activation to be able to simulate a ‘no notice’ or ‘limit notice deployment,’” Col. Timothy Zetterwall, commander of the 7th Transportation Brigade (Expeditionary), said Saturday wile speaking with media in the Port of Port Arthur’s administrative offices. 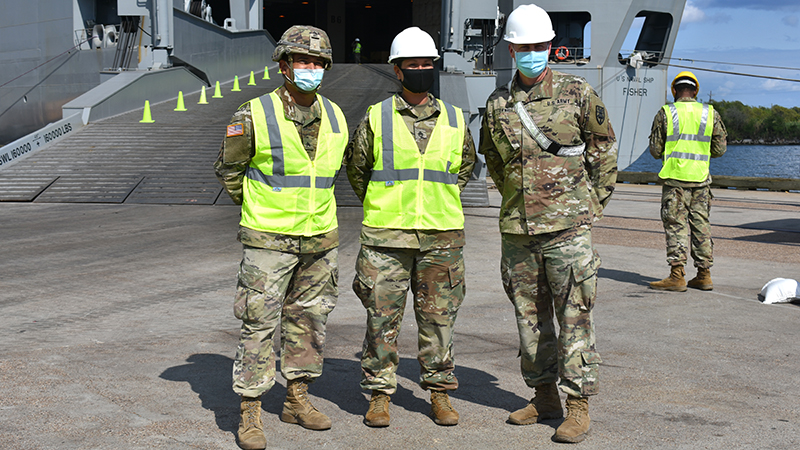 The brigade has the ability to do humanitarian aid as well as disaster assistance or in the theater of war.

Zetterwall gave examples of work such as in Haiti, where there was a degraded port scenario or Liberia during Ebola.

They also do “bare beach” as they have the Army’s watercraft, he said, adding they can place a pier into the sand and create a floating pier off some of the vessels and bring equipment in.

The current mission is set for the Joint Readiness exercise.

“We’re a very unique organization. There’s not another active duty unit like us in terms of the capabilities we have,” he said. “They refer to us as the Army’s Navy when it comes to our watercraft and what we do to bring the force to shore.”

Local vendors are being tapped to help with the numerous soldiers in town.

Diane Guidry, owner of Edith’s Place, stopped cooking long enough to meet with the media and military personnel on Saturday.

She said she is grateful for the opportunity and has learned a few new dishes — vegan — from some of the soldiers’ requests.

The military will be in town until the cargo is offloaded, but no timeline was shared.

Anthony Theriot, director of trade development with the Port, said Port officials are thankful for the chance to work with the military, as it also helps them practice and prefect their work. 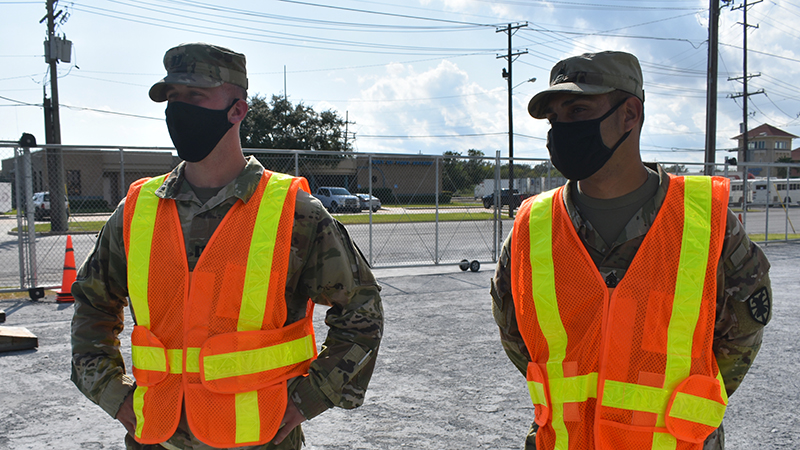 Hurricane damage from super storm Laura could have been so much worse in Port Arthur and Mid-County, especially when seeing... read more