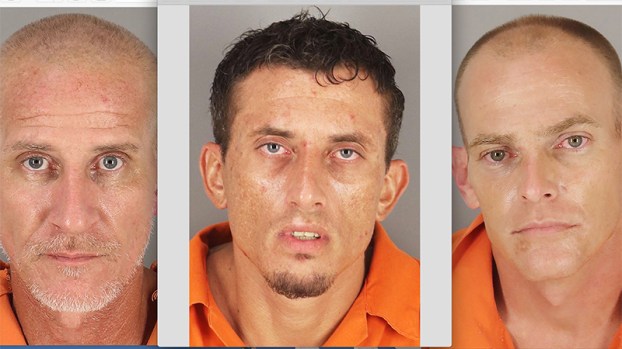 A Jefferson County grand jury has handed down indictments for felony theft to two Nederland men and a Port Neches man.

Sheriff’s deputies contend the men are responsible for stealing two Polaris crew cab Rangers and two Lincoln welding machines from a business and hiding them in a wooded area behind a mobile home park.

Raymond Joseph Kendzierski, 33, of Nederland; Chad Norman Smith, 45, of Port Neches; and Jason Robert Boone, 36, of Nederland were each indicted for felony theft earlier this week for the April 8 crimes.

According to court documents, Smith was standing on the side of a 2001 GMC Sierra truck and Boone was standing next to the trailer. According to deputies, the men said they were loading the Polaris — which had a fresh coat of black paint — to bring to a person in Nederland.

The Polaris was confirmed stolen from Mustang Rental at 3200 North Twin City Highway in Nederland on April 8, along with another Polaris Ranger and the two Lincoln 300 welders.

One of the stolen UTVs (utility task vehicles) and the two welders were recovered in the woods behind the mobile home park a few weeks prior.

Kendzierski told detectives he bought the Polaris for $500 from a man named Jose Sanchez and was trading it to a man named Caleb Crochet for a Chevrolet Suburban. Kendzierski was supposed to meet up with detectives and make a formal statement but did not show up.

Police haven’t found Sanchez and Crochet and believe they may not exist.

Fast forward to May and Boone’s wife makes a statement to law enforcement saying she saw Kendzierski painting the Polaris just 10 to 12 feet from her porch and was unaware it was stolen. Boone and Smith were there at the time.

She said she left after midnight and wasn’t home when her husband and Smith were arrested.

Around this time a different deputy was speaking with the uncle of Kendzierski about a separate matter and learned Kendzierski confessed to stealing the items with some friends and asked his uncle if he knew anybody who wanted to buy them.

Kendzierski reportedly told his uncle he removed the GPS devices from the Polaris, as well as other details.

Smith was charged with two counts of felony theft with $5,000 bond on each and bonded out of jail on Aug. 29.

The makeup of the Port Arthur City Council after Nov. 3 could include two faces already on board. Then again,... read more