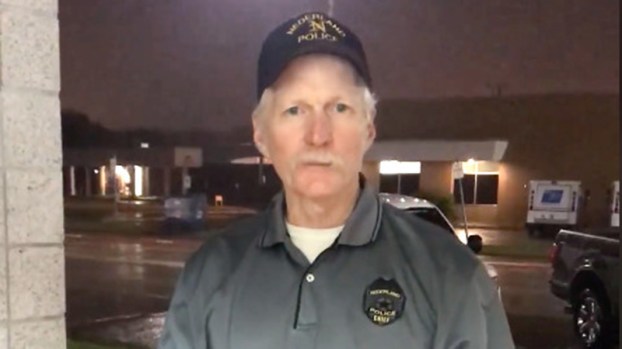 NEDERLAND — A number of southeast Texans left town when Hurricane Laura made its approach before eventually skirting local cities and wreaking havoc not far away.

First responders were tucked safely away in various areas but were still in the mix of things doing their jobs as the winds peaked and the rain hit.

Nederland Police Chief Gary Porter, along with other officers, the Nederland Fire Department crew and other city officials, were at the Homer Nagel Public Safety Center on Boston Avenue.

Porter decided to give updates via the NPD Facebook page — that is until his daughter told he him needed to do the updates on Facebook Live.

As the storm rolled in, Porter, sometimes with Fire Chief Terry Morton, went outside and gave a report.

Porter said they received a lot of positive feedback from residents and decided to do the same updates should another weather event come along.

“In the past during hurricanes, especially Harvey, I got some input from citizens that had evacuated that were worried about their property and what was going on,” he said. “They couldn’t access what was going on locally from the news where they were at. When we started our storm prep for Hurricane Laura, we decided to utilize our Facebook page and reach out to our citizens and anybody else and keep them updated on the local conditions.”

The updates were a success in more ways than one.

“One good result we did find was that it lowers the call volume in dispatch from people wanting to know what’s going on. It was very helpful,” he said. “We will utilize this in the future to keep the public apprised on the situation and help out dispatch.”

The day before the storm, the staff was brought in and put on 12-hour shifts. In addition, the police department partnered with the Texas Department of Public Safety and had additional boots on the ground to help patrol.

“Even though the officers were from out of town, we briefed them quickly where the main thoroughfares were and allowed our officers to remain visible so any lowlife could see not one, but several officers,” he said. “We had very little issues.”

The Homer Nagel Public Safety Center, as well as city hall, operate as emergency operations centers and are built to withstand winds to 150 mph.

Porter said having the staff and city officials together was beneficial.

“It was good to be able to turn around and talk to the city manager and not have to call; you get the answer immediately,” he said.

“I thought it was real good,” Albanese said. “He kept us abreast of everything, of course with Terry Morton, fire chief. It was a real good idea and kept the citizens informed.”

Albanese also liked the fact that the EOCs, the staff and essential personnel were able to stay in town.

Porter has served as chief for just over two years and began his career in law enforcement in August 1977. He worked in several areas before joining NPD in July 1981.

NEDERLAND — The Nederland Economic Development Corporation is making a $300,000 plus investment in business and job creation along Nederland... read more