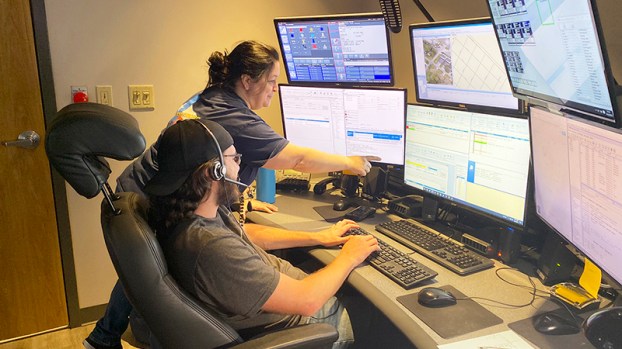 Barbara Hollier of the Nederland Police Department points to a screen in a dispatch office. (Courtesy photo)

1ST RESPONDERS — More to the 911 system that meets the eye

The calls come through in fair or foul weather, during electrical outages and even when the need arises for these specially trained call takers to move to another location.

What’s new, how it works

The 911 Emergency Network, which is a division of the South East Texas Regional Planning Commission, will see a big change with upgrades to the computer hardware in Jefferson, Orange and Hardin counties.

911 calls in the three counties are answered at 12 Public Safety Answering Points, or PSAPs, which are the three sheriff’s offices and the major police departments that are open 24 hours a day, 365 days a year.

Pete De Le Cruz, director of the Southeast Texas 911 Emergency Network, said every five years technology advances so much that they upgrade the equipment the 911 call takers use.

“This particular system upgrade is in line with the five-year plan going from more of a telephone network to more of a computer network,” De Le Cruz said. “All of the agencies are connected by fiber optic cable now. In addition to fiber optic, five years ago we installed microwave towers in the region, so if we ever lose the fiber optic the call will automatically transition to microwave.”

De Le Cruz said if transmitting data through a normal LTE network it is done in a secure fashion.

“Now that there is more and more data in the environment, we had to add technology to secure the network so it is not vulnerable to data attacks,” he said, adding they utilize companies that specialize in data security to protect the 911 system.

“The system is very secure,” he said. “We worked very hard so the public always has access to 911 service in any situation and at all times.”

The agency works with the PSAPs and making sure there is an uninterruptable power supply, or UPS.

“The UPS is a large bank of batteries with technology built in so when the power is cut, the UPS supplies power to the critical load in the dispatch centers so it is protected by power failures,” he said. “Then the generator has time to start up, which takes just a few seconds and during that gap when commercial power is interrupted the UPS supplies power, then the generator and the UPS is taken back out of the electrical loop.”

This, he added, ensures the critical load, the radio system, computer dispatch; telephone system stay up in the event of a power outage.

During a storm comes the ability to move a call center. In Beaumont there is the SETRPC building where call takers are trained. The building can be utilized in case a move is necessitated.

“We could move call centers from Port Arthur to Beaumont and they can answer the calls for the city,” he said.

PAPD’s dispatch was moved to the ISPC building, where call takers took calls and Vidor PD moved their operations to their city hall.

“Technology allows up to be very flexible where we set up 911 answering points during storms or any other event that forces an agency to leave,” he said.

The technology was there and ready during the TPC plant explosion in Port Neches last year but there was no need for the move at the time.

The change-up is seamless.

De Le Cruz cites the availability of a “make busy switch.” For instance, should there be a bomb threat called in saying a bomb was outside the door of an agency, the switch would be flipped and calls would instantly go to a sister agency. In the case of Port Arthur, Nederland’s Central Dispatch would take the calls.

“The call takers are really the superstars,” he said. “Their job is to help the public when something generally bad has happened. They work with the caller to make sure the caller gets the proper emergency service they need.”

De La Cruz offered some advice. Should an individual accidently call 911, please stay on the line. You will not be in trouble.

“Stay on the line. That saves time for a police officer that could be dealing with other issues,” he said. “They will call you back if you hang up. It’s an automatic call and if you do not answer they will send a police officer to see if anything is wrong.”

While calling is the best way to reach 911, there is another option: texting.

Some may have seen the billboard on Twin City Highway in Groves touting “Call if you can, text if you can’t.” The message is being rotated through the tri-county area.

This option lets a person compose the text if they cannot speak or are in a dangerous situation.

Even with this option the best bet is to call. By calling the call taker can learn a lot of information quickly.

A Jefferson County grand jury has handed down indictments for felony theft to two Nederland men and a Port Neches... read more