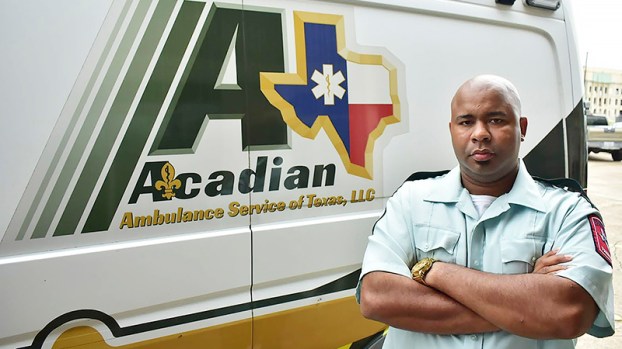 Keven Gilbert seems to be a good-luck charm for high school football players in his presence.

“Luckily the players don’t get hurt a lot when I go to a football game,” he said. “I’ve had a couple of cheerleaders do a couple of backflips and knock themselves out.”

Gilbert, 38, is a paramedic with Acadian Ambulance Services, and feeds his need for a football game each Friday night, many of them in Port Arthur and Mid-County. The majority of the games he works include the Memorial Titans.

“Personally, I’m a big sports fan because of the competitiveness,” Gilbert said. “I’m into all types of sports. I work a lot of the Port Arthur games. They’re a pretty good team. They’re a fun team to watch.”

“He’s one of our guys who will always volunteer to work a football game, even if it’s a day off,” Burleigh said. “He’s kind of like me, a big football fanatic. He loves working the games.”

To Gilbert, a 2000 graduate of former Memorial rival Ozen High School in Beaumont, high school football is amateur competition in its purest form.

“The kids are playing for the schools,” Gilbert said. “A lot of kids are trying to get scholarships to go to college or maybe try to go to the pros, but it’s one of the purest forms of sports and competitiveness. It’s great to see kids playing high school football out there. You don’t have to be out there if you don’t choose to. You play for the love of the game.”

Gilbert usually partners with lady friend Jennifer Hafford, whether it’s being on the sideline to assist an injured player or assisting someone in an emergency at home or about town. It’s a much different career choice than he had planned when he finished a four-year stint in the U.S. Navy.

“I looked at being in the fire department,” he said. “I actually went to the fire academy and completed that. Before all of that, I was working in juvenile detention, and I got burned out of that really quick. It just wasn’t for me, so I decided to go to school to become a nurse. I went to the fire academy because it was something I thought I would try differently.”

Gilbert started working at Acadian in late 2012 and began to realize he didn’t want to run into burning buildings.

“I liked being on the truck more and patient care and assessment,” he said. “It was a lot of fun. You meet different people. Sometimes, the best part of your day ain’t starting an IV. It could be holding someone’s hand or having a conversation with them as you take them where they need to go.”

Gilbert didn’t play football, citing he wasn’t much of a team player and hated to lose. He got into karate and earned a black belt along with some state and world championships.

But the thrill of a football game leads him to find the best available game of the week to work. Unfortunately for him, another crew picked up Friday night’s Memorial at Port Neches-Groves game.

Port Neches-Groves vs. Nederland, however, is not among Gilbert’s favorite rivalries.

“It’s a great game,” he said. “They pretty much shut the city down for it in Mid-County. The problem with that game, whatever happens in the city happens at that game.”

If an injury occurs, it’s usually in the stands and not on the field, he believes.

“You don’t get to sit back and enjoy that game,” Gilbert said. “There are a lot of logistics going on. There’s a lot of tailgating.”