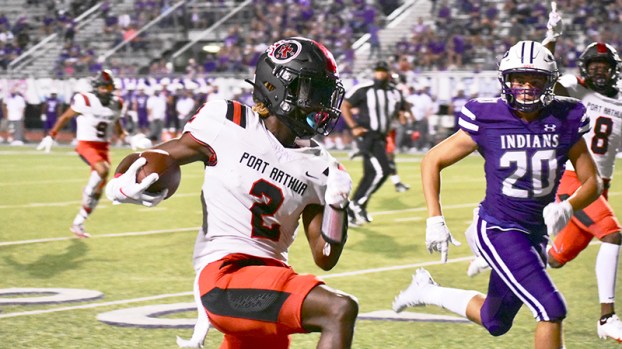 PORT NECHES — The season opener between Memorial and Port Neches-Groves needed more than four quarters to decide a victor as the visiting Titans beat the Indians 38-32 in overtime at The Reservation Friday.

After a PNG comeback was capped off with a late, tying touchdown with 6 seconds remaining in the fourth quarter, the Indians fumbled on the first possession of overtime, setting up Memorial’s 33-yard game-winning strike from Jah’mar Sanders to Tony Brooks.

“It’s a testament to our kids fighting through adversity,” Memorial head coach Brian Morgan said. “We talked about it at pregame and halftime. We knew it wasn’t going to be easy to play over here. The kids really fought. When things weren’t going our way, we kept fighting. I’m just fired up for these kids and this community.”

Memorial’s speed and pace seemed to give PNG problems early on as the Titans’ big plays dominated the first quarter of play. 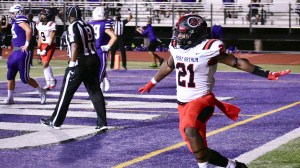 Memorial running back Branden Chaney celebrates after a touchdown run in the first quarter at PNG on Friday. Memorial led 20-0 after the extra point. (I.C. Murrell/The News) 9-25-20

Memorial wasted no time when Tyrence Augusta broke free for a 50-yard run on the sixth play of the game to give the Titans a 7-0 lead just over a minute into it.

After a PNG punt gave the Titans the ball on their own 20, quarterback Jah’mar Sanders took a run up the middle for 74 yards. The extra point was no good, but Memorial had a 13-point lead with 8:44 left in the first quarter.

Drops plagued PNG early on in its first drive when quarterback Blake Bost broke out of the pocket and threw a dart to a wide-open Grant Pearson in stride, who dropped the pass with no defender within 5 yards. The drive ended with a punt and Memorial scored soon after.

Drops continued to be a problem on the following drive when Bost found Brady Nail open on what would have been at least a 20-yard gain, if not for a drop. The drive ended with a punt down to the Titans 3-yard line.

“It’s first-game mistakes,” PNG coach Brandon Faircloth said. “We all make them. Players make them. Coaches make them. That is just part of the game. I’m just proud of our guys for bouncing back, playing the next play and moving on and finding a way to tie the game with 6 seconds left. I was really proud of them.”

At halftime, the score was 20-9 in favor of the Titans. 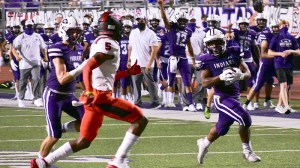 PNG running back Lance Vaughn makes a big gain into the red zone as Memorial defensive back Maleek Jones tracks him down in the second quarter Friday. (I.C. Murrell/The News) 9-25-20

PNG opened the second half by driving deep into Titans territory. Bost found Nail on an arching 26-yard pass that got the Indians down to the 1-yard line, from where Bost ran it in to make the score 20-15 with 8:39 left in the third quarter.

On the ensuing kickoff, a Memorial returner muffed the kick before PNG jumped on top of it. Bost would punch it in from 2 yards out on the next play to give the Indians a 23-20 lead after missing on the extra point.

Memorial answered quickly with a 1-yard run by Sanders, but the extra point was blocked and returned by PNG to make the score 26-25 in favor of the Titans.

After forcing a punt, Memorial drove 70 yards, converting a fourth and 12 with a 33-yard pass from Sanders to Hayward with 1:35 left in the game. The Titans elected to go for two but failed to convert, setting the game-tying score by PNG.

“We showed a lot of heart,” Faircloth said of his team. “There’s a lot of things we need to improve on and we know that. Every coach does. It would’ve been easy to lay down and give up, but our guys fought and clawed and got back into the game. That kind of heart is what you can build upon. It is a long season. First games are always tough, especially against a great opponent.”

Sanders was plagued in the second half with cramps, Morgan said.

Bost finished with five total touchdowns as well with 125 yards passing and 57 yards on the ground.

The Titans dominated on the ground: 341 yards on 36 carries.

**This version is CORRECTED to reflect Brooks caught the winning pass.**

The Nederland football team is trying to stay focused after numerous positive coronavirus tests on the team forced the Bulldogs... read more