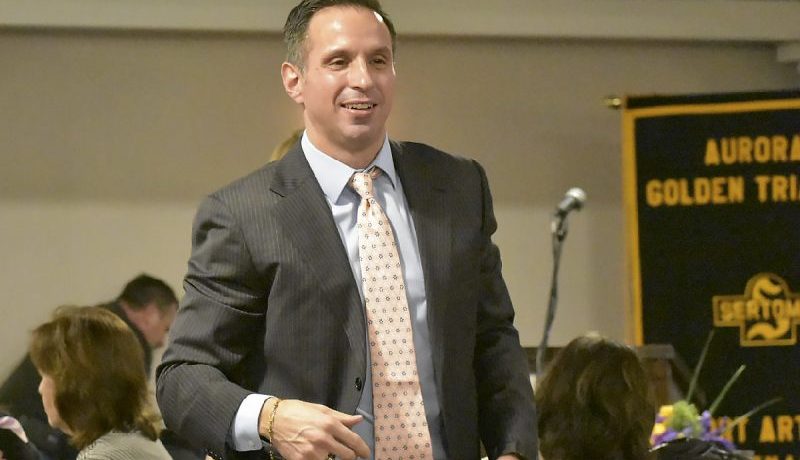 Motivational speaker Damon West of Nederland greets guests at the Aurora-Golden Triangle Sertoma Service to Mankind banquet in his honor on Feb. 8, 2018, at Benton’s in Port Neches. (I.C. Murrell/The News)

We’re all given a message to spread.

Whether we get down on our knees and ask God to lay one on our hearts, or a harrowing experience teaches us a valuable lesson worth sharing, it’s on us to connect with other souls for something greater than ourselves.

Damon West’s message of changing the atmosphere around oneself isn’t new, but it doesn’t get old.

A paroled inmate, who was sentenced to 65 years in 2009 for his role in a series of Dallas burglaries, the native Port Arthuran, and Nederland resident, achieved a major personal goal to return to the prison system.

Hey, now, quit thinking negatively. West is keeping his nose clean, and he wants inmates to do the same.

West spoke to the Federal Bureau of Prisons, or BOP, in Washington, D.C., on Tuesday to share his story of the coffee bean — the little grain that changes the boiling water instead of hardening like an egg or softening like a carrot in the same environment. West learned this parable from a man named Mr. Jackson during his seven years behind bars, and it allowed West to change the attitudes of others around him to create positive outcomes.

The parable also became the basis for West’s bestseller The Coffee Bean, which he co-wrote with Jon Gordon.

West, who earned a master’s degree in criminal justice from Lamar University in 2019, has a fellow alumnus to thank for talking with the bureau — David Paul. He’s assistant director of the BOP and serves as director of re-entry.

“Whenever I spoke to the crowd, my message was clear that if you want to change your culture for the better, then culture has to be a top-down thing,” West said. “Everyone there has to change and be a coffee bean.”

After the presentation, West said, BOP Director, Michael Carvajal, told him he wanted federal prisons, staff and inmates to have the coffee bean message become part of the culture. This is the first step for West to share his message to inmates in federal prisons across the country. It’s a rare achievement, so to speak, for someone who has been paroled or released to be allowed back behind bars — to do good, of course.

That’s where Paul came in.

“Director Paul is someone who likes the book, The Coffee Bean,” West said. “It’s one of those things where I met someone through social media because he’s a big Jon Gordon fan. [Paul] was a big fan of The Coffee Bean. That’s how we got to know each other.”

“I was blown away,” said West, a former Thomas Jefferson High School and University of North Texas quarterback. “There’s only 15 people in the conference room, and one-fifth of the people in that BOP room are Lamar graduates.”

To credit Lamar, West said the university has people from “different backgrounds” who prepare graduates well for different avenues of employment in the criminal justice field.

West will do more than just speak to federal prisoners, dates for which are to be determined. He’s teamed with educational consultant Lisa Spain to create a prison curriculum to be taught to inmates.

That, so to speak, is right up West’s alley. He teaches criminal justice at the University of Houston Downtown.

“The thing I’m doing that has changed is that I’ve built a prison curriculum around the principles by which I live my life and the tools I use to get out of prison and maintain my freedom on the outside,” West said. “That’s what I’m bringing to the Federal Bureau of Prisons and all 50 states’ prison systems. I want to bring The Change Agent curriculum to every prison in America.”

The Change Agent: How a Former College QB Sentenced to Life in Prison Transformed His World was West’s debut book, released in March 2019.

It won’t be the first time West returns to a prison setting. He visits — at no cost to taxpayers, he stressed — all 104 Texas prisons to share The Coffee Bean and donate copies of both of his books to every prison, thanks to the good graces of the Texas Department of Criminal Justice.

That’s not all. An undisclosed federal military base has invited West to do mindset and leadership training for its troops starting in October.

Free as a bird, West has become a messenger of hope for those deserving of a second chance. All of us outside the prison environment need only the mindset to receive the message.