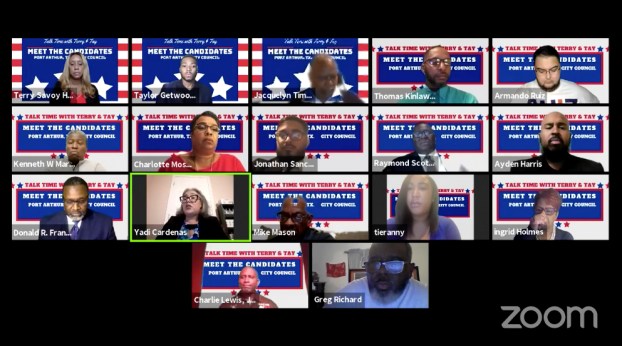 Editor’s note: For conciseness, this article only highlights some of the talking points by each candidate.

More than 300 questions and comments flooded in during the two-hour forum, which was an episode of the Facebook Live program Talk Time with Terry and Tay, hosted by Terry Savoy-Hadley and Taylor Getwood.

Election day for the council seats is Nov. 3.

A new councilmember will fill the seat currently occupied by Raymond Scott Jr., who is term-limited and is running for an at-large position.

West-Holmes boasted experience in writing grants and managing a $10 million budget. That happens to be the amount Port Arthur has set aside to reconstruct roads each year for five years.

Lewis would like to allow electricians to pull permits to wire homes, which would lower costs for the homeowners and introduce incentives for more businesses to invest in downtown.

“That’s why all these industries have expanded,” he said.

Tax abatements, historical tax credits and new market tax credits are in place for businesses that want to move into downtown, Lewis added.

Mason hopes to draw from his 35 years as an educator to effectively lead District 1 and said he has working knowledge of the city with experience as director of housing. The diversity of Port Arthur is also important to recognize, he said.

“Each group brings richness to the culture and should be included in all aspects of governing,” Mason said. “The city of Port Arthur has a great promise for the future. It’s great, now, but it needs more greatness. It’s important that city council representatives recognize that potential, [and] add to the growth with reasonable adjustments to enhance the systems already in place.”

Mason said he would bring integrity, servant leadership and standard of excellence to the council.

“I joined the Port Arthur Chamber of Commerce, guys,” he said. “What we have done with the Chamber of Commerce, these guys have had many, many, many job fairs. … Not only that, I’ve spoken with the guys at the EDC, and they have a really cool program that I’m 100 percent for. They want to create a pool of already qualified workers … so next time a refinery or contractor needs workers, they will be able to cherry-pick the best workers from there.”

Before fixing streets, Ruiz said, the city must focus on the drainage. When focusing on the streets, the city should focus on the ones that have the most impact on its citizens, he added.

Ruiz also stressed the need for more safety, adding he’s tired of hearing about shootings in Port Arthur. Getting the word about Port Arthur’s Crime Stoppers program through businesses and their customers would help, he suggested.

Ruiz also mentioned an art therapy program that has led to the painting of electrical boxes and other structures such as the Seawall to beautify the city.

Jones did not participate in the forum.

While not everyone who experiences an auto burglary makes a report to police, the crime is on the rise locally... read more