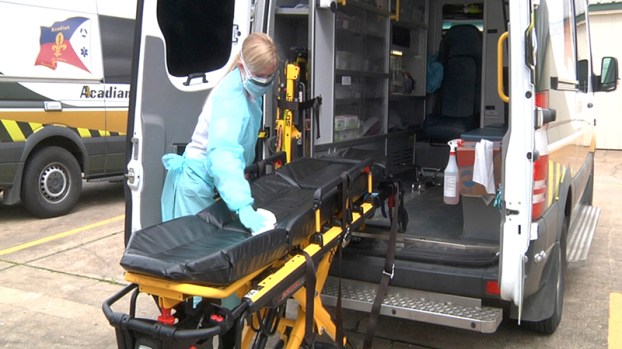 An employee with Acadian Ambulance decontaminates an ambulance. (Courtesy photo)

He replaces Jerry Romero, who will be retiring at the end of the year after 44 years of service.

Back joined Acadian as a vice president in 2013 and has held leadership roles in several areas including fleet maintenance, regional operations and integrations.

A native of Perth, Australia, Back is a graduate of the Royal Military College of Australia and holds a Bachelor of Business Administration from Southern Cross University and a Master of Business Administration from Louisiana State University. He is also a graduate of the National EMS Academy and a nationally registered emergency medical technician.

Back served in the Australian Army for eight years, retiring as a captain. He earned the Australian Army’s Distinguished Service Medal while serving with U.S. and other coalition forces on multiple operations in the Middle East, Central Asia and Pacific.

After his military service, Back worked in the maritime industry as a project, operations and country manager in Southeast Asia, West Africa, India, Brazil and Australia, servicing a number of the world’s offshore oil and gas regions.

“I commend the committee for their diligence and tireless effort in this process. I am pleased to accept their recommendation and to appoint Justin as president of Acadian Ambulance Service,” Zuschlag said. “Justin’s extensive and varied leadership experience at Acadian, as well as in the Australian military and in the private sector, will serve him well as president,” he added.

Back will be the fourth president of the ambulance division of Acadian Companies, following in the footsteps of Roland Dugas, David Pierce and Romero.

“I will miss Jerry Romero’s wise counsel and steady leadership. I wish him best of luck and health in his well-deserved retirement and thank him for his 44 years of loyal service to Acadian. All of the previous presidents played crucial roles in the history and development of Acadian Ambulance Service and I’m confident Justin will continue to build upon the foundation created by his exceptional predecessors.” Zuschlag said. “With Justin’s passion and enthusiasm for servant leadership and the support of the excellent leadership team at all levels of our company, I’m confident in the future of our ambulance division and our entire company,” he added.

“I’m very humbled to have been given the opportunity to serve in this role with our team. Ours is a special mission; it takes special people to carry it out. Going into our 50th year next year, I am excited to work with our leadership group to continue to grow Acadian Ambulance,” Back said.

“I am very proud of our entire leadership team for rising to each challenge that we have faced throughout the years while building a truly great company. I have confidence that Justin has the skills, knowledge and energy to make our company even greater,” Romero said upon Back’s appointment.

Acadian Ambulance is one of the largest ambulance services in the nation, offering emergency and non-emergency transportation to areas in Louisiana, Texas, Mississippi and Tennessee. They are employee-owned and accredited by the Commission on Accreditation of Ambulance Services.

The new Griffing Park Community Garden is becoming a reality. A virtual groundbreaking ceremony was held Wednesday with the Spindletop... read more