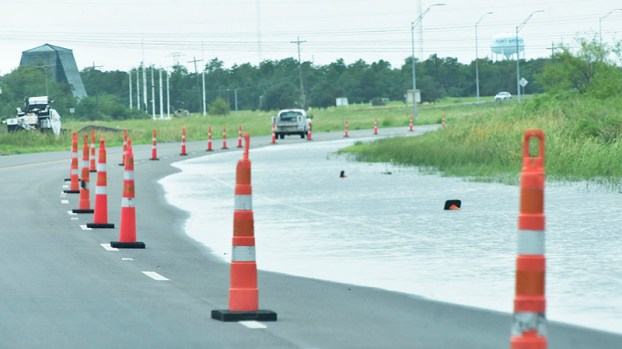 Rainwater floods a shoulder and a portion of the right lane on Texas 73 southbound from the Rainbow Bridge on Tuesday. (I.C. Murrell/The News) 9-22-20

As Tropical Storm Beta was reduced to a tropical depression, city operations in Port Arthur proceeded as normal Tuesday, according to local leaders.

“We’re just thankful the weather conditions have changed in our favor and stuff won’t be as serious, but we’re still not letting up on what we’re supposed to be doing, and that’s making sure trash and limbs from Laura are picked up,” City Manager Ron Burton said.

City hall was operating as usual under coronavirus precautions, Burton added. It has not been open to visitors since March.

Beta was not posing as serious a threat to Port Arthur on Tuesday morning as originally forecasted, although some outlying areas — namely Texas 87 South in Sabine Pass and Texas 73 going into Port Arthur from the Rainbow Bridge — experienced flooding.

Mayor Thurman Bartie issued a voluntary evacuation order for Sabine Pass and Pleasure Island on Sunday and does not foresee declaring a mandatory evacuation. 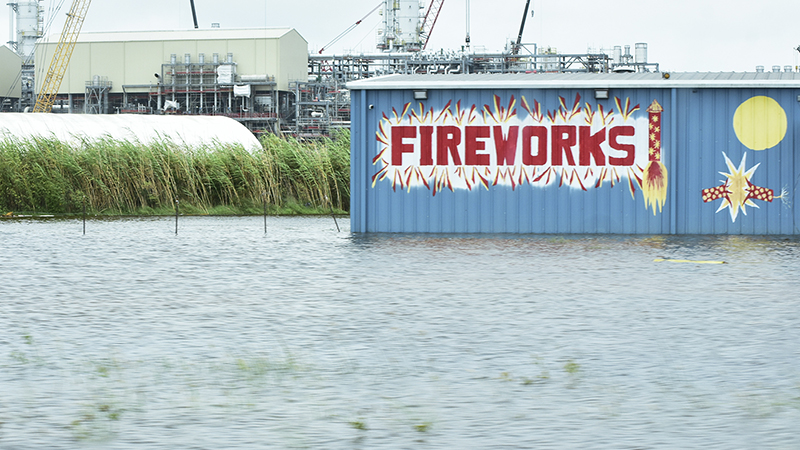 A fireworks stand on Texas 73 southbound from the Rainbow Bridge is flooded Tuesday. (I.C. Murrell/The News) 9-22-20

The water level at Sabine Pass was observed at 3 feet and at Rainbow Bridge at about 2.6 feet as of 6 a.m., the National Weather Service said.

Tides were expected to run 2 to 3 feet above normal Tuesday night into Wednesday and drop a little each day through the remainder of the week.

Traffic was still reduced to one lane southbound from the Rainbow Bridge as of noon Tuesday, but only for about a mile.

“The protection with the Seawall protects us from having the water come in the way it is on South 87 and on the northeast corridor of 73 going to Bridge City,” Bartie said during a Facebook Live stream. “It never gained the strength it needed to become some sort of a life-threatening hurricane.”

The National Weather Service forecast 2-5 inches of rain through Sunday and a marginal risk of a tornado for Jefferson County. A band of rain covered much of east Texas, east Oklahoma and Arkansas, with the heaviest rain band in the Gulf of Mexico, south of Louisiana. Wind gusts ranged between 22-24 mph in Mid- and South Jefferson County at 10 a.m. Tuesday.

“Let’s just pray whatever speed it going, we don’t want it to stop and rest, but that it continues to move and we continue to be protected and don’t have a Harvey experience,” Bartie said.

He also told Facebook viewers: “I don’t want you to think the preparation you’ve done is in vain.”

Beta is the second major storm that has threatened Jefferson County within a month’s span. Hurricane Laura made landfall as a Category 4 on Aug. 27, but created little damage here, compared to the destruction it left behind in southwest Louisiana.

Still, the damage in Port Arthur has led to a lengthy process in trash and limb collection by city workers.

“A lot of areas, people have taken the opportunity to do housecleaning, so it makes it a little more difficult,” Burton said. “People have got to be mindful, don’t put [debris] in drains because you compromise the drainage system and make the place much more prone to flooding. That, you don’t want to do. We want to continue to use this occasion as an opportunity to educate our citizens that even when you cut the grass, do not blow the grass onto the street and clog the drains and compromise our drain system. It’s an educational process for the city and the citizens as well.”

Bartie urged residents to remain vigilant against natural disasters and coronavirus, and have garbage ready to be picked up only on the day of the resident’s garbage truck route.

He also reminded those who haven’t already to register to vote and/or participate in the U.S. Census.