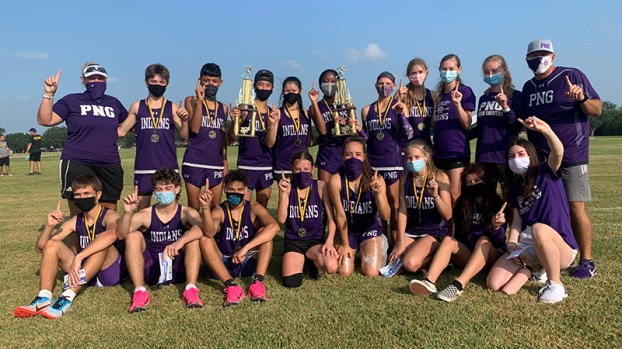 Coming off first-place finishes in Nederland on Sept. 19, the Port Neches-Groves boys and girls cross country teams look forward to their meet in Liberty on Sept. 26.

Before the season began, head coach Josh Tanner said he was anxious to see how Page, a freshman, would match up against other opponents. On Saturday, her high school career got off to a running start.

“Katherine is a competitor,” Tanner said. “She was coming down to the wire with the Nederland girl (Ava Wiltz). They were battling neck and neck coming down to the final kick. I could see the look in Katherine’s eyes. She wasn’t going to lose on Saturday. She just turned it up a notch.”

Butler, who won district as a freshman last year, came in third place with a time 14:05.99.

“Sanaria had been our fourth fastest girl in practice,” Tanner said. “She got in the meet and came down to the wire as well. She also has that can’t-lose mentality and that is why she finished so well in district last year.”

Jason Lovejoy was the PNG boys’ highest finisher in eighth place with a time of 19:50 on a 5,000-meter course.

Tanner said Page and Butler have a perfect mix of competitiveness and willingness to be selfless for the team.

“Each of them want to win, but they know how to win individual matchups, which really help with team scoring,” he said. “We all know that iron sharpens iron.”

Tanner said he was happy to get the season started and see the coaches again.

“I was overjoyed after the day for my teams,” he said. “I think each of them were happy with the way they ran. I know they were happy to be back competing. The coaches from the other teams were happy to see each other. We’re kind of a cross country coaching family. We compete against each other but we are all friends.”

Nederland head coach Tommy Olesky said he was very proud of how his teams ran. Both of his teams finished in second.

“I was real proud of our whole team,” he said. “We had some really good times and I look forward to watching them improve.”

Nederland and PNG will head to Liberty for their next meet Saturday.

While Nederland got a glimpse of cross country mainstay in Barbers Hill, Tanner said it will be his teams’ first time lining up against the Eagles this season.

Coaches adjust to single scrimmage ahead of late season start

In recent years, University Interscholastic League teams in classes 5A and 6A would have been permitted up to two scrimmages,... read more