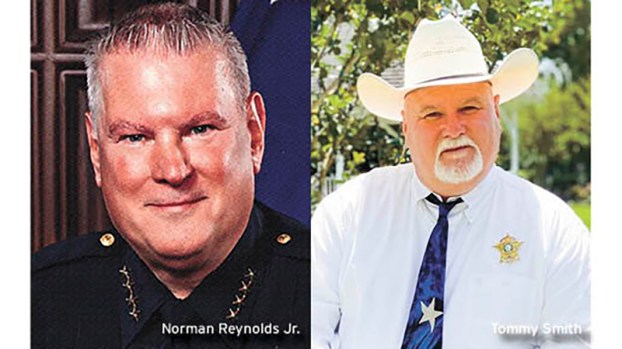 GROVES — Drugs and property crimes top the list of most prevalent criminal concerns in the city of Groves, according to Norman Reynolds Jr. and Tommy Smith.

Reynolds, the current city marshal seeking reelection, and Smith, his opponent, each have their own thoughts on dealing with these two issues.

Reynolds, a 41-year law enforcement veteran, said approximately 25 percent of people convicted of property crimes and drug offenders in jails committed the crimes to get money for drugs.

This isn’t counting those who are under the influence when the crimes — robbery, burglary and theft — are committed.

To combat the problem, Groves Police Department has a proactive street crime unit putting more officers on the streets at peak times of criminal activity.

The extra units help support patrol by targeting specific issues. In addition, two new officers were recently sworn in, bringing the total number of officers to 23.

“And we are going to have a minimum of four out on night shifts and sometimes up to seven,” Reynolds said. “We can accomplish this by using some detectives.”

Another way to combat the intertwined crimes is the cooperative sharing of intelligence going on with GPD, Port Arthur Police Department, Texas Department of Public Safety, Jefferson County Task Force and more.

“Since Jan. 1 we made 71 possession-of-drug cases and more recently, July 1, we made 31 narcotics cases,” Reynolds said. “They are consistent; pills, crack, heroin and so forth.”

Smith, also a veteran lawman with 30 years of experience, spoke of the correlation between drugs and crime, saying the addiction nurtures the lifestyle with an emphasis on a deviant lifestyle and short-term goals.

“This population learns criminal skills from other offenders and are exposed to situations that encourage crime,” Smith said. “Motivated to get money for the user’s need to buy drugs introduces theft offenses as an easy mark and a short term gain. This is why Groves needs to be part of the area drug task force and stop acting as if the city is an island. The crisis of substance abuse is a national crisis, and the criminal element that comes with it flows in and out of our city.”

A collaboration with other community agencies is important and helps identify and prosecute those in the drug world, Smith said.

Property crimes are when a person’s property is stolen or destroyed and include burglary and theft. These, he said, are the most difficult to solve.

“Set up a neighborhood watch or a community patrol working with police, mentor young people who need positive support from adults,” he said. “Community policing is the key to combatting these problems.”

Tommy Smith began his career in law enforcement after being honorably discharged from the United States Marine Corps. He is a certified master peace officer in the state of Texas with 30 years of experience in numerous positions throughout the field and is currently commissioned with Orange County Sheriff’s Office.

Smith’s career has given him the opportunity to obtain a vast knowledge of law enforcement administration, departmental budgeting, criminal law, civil law, as well as the many complex aspects of security.

Norman Reynolds Jr. is married to Becky Balsano Reynolds and they have five children and one granddaughter.

He is a 1979 graduate of Port Neches-Groves High School and, with the exception of a few years, is a lifelong Groves resident.

Reynolds started his law enforcement career at the age of 18, having worked for the Griffing Park Police Department and Jefferson County Sheriff’s Office before coming to Groves.

City of Port Arthur crews are working to get trash and limbs picked up, bringing in heavy equipment from other... read more