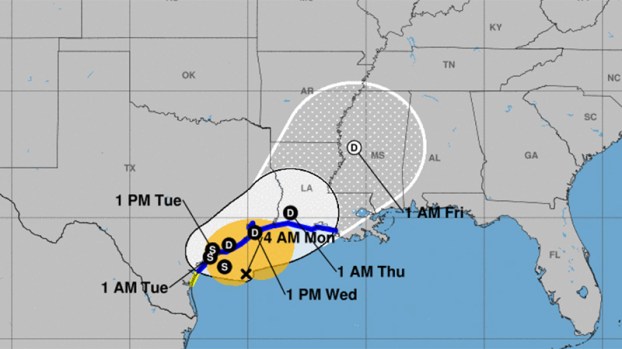 The expected slow motion of Tropical Storm Beta will produce a long duration rainfall event from the middle Texas coast to southeast Louisiana.

Rainfall will also spread northward into the Ark-La-Tex region and east into the lower Mississippi Valley and portions of the Southeast through the end of the week.

There is the danger of life-threatening storm surge near times of high tide through Tuesday along portions of the Texas and Louisiana coasts within the storm surge warning areas.

Residents in these areas should follow advice given by local officials.

“As the mayor of the city of Port Arthur, I respectfully request the voluntary evacuation of Sabine Pass and Pleasure Island,” Bartie said during a news conference at the Port Arthur Police Department headquarters.

“Those two areas in the city of Port Arthur happen to be our lowest lying areas in the city. What we would like is for those citizens to move to higher ground. They have the time now, and if a surge comes, and it will … then they would be probably out of harm’s way being in those areas.”

Gas prices have tip-toed lower with seasonal factors the primary driver, though with hurricane season continuing to be very active,... read more