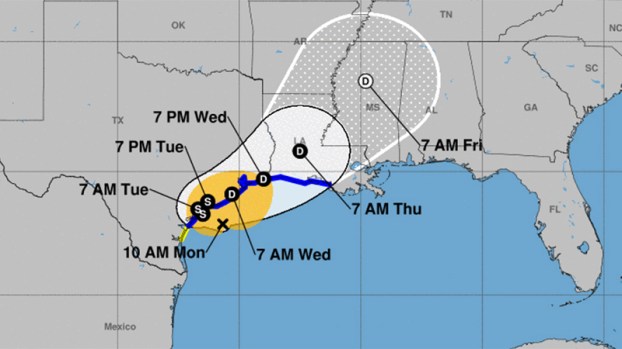 Tropical Storm Beta is weaker and has shifted further west, according to the National Weather Service

Landfall will be Monday night near Matagorda Bay.

Wind gusts of 30 to 40 mph are expected, mainly along and south of I-10 in Southeast Texas and southern Louisiana.

Some places will see an inch or two. Other places could see ten inches or more, depending on where the rain bands set up each day this week.

Flash flooding is possible where the heaviest rains fall.

Storm surge of one to three feet above ground level is expected during high tides across the coast of Texas and Louisiana Monday through Thursday.

There is a small threat for an isolated tornado in Southeast Texas and southern Louisiana Monday and Tuesday.

The area of flash flood concern Monday will be the large rain band moving onshore in south central Louisiana.

Wind gusts of 20 to 40 mph are expected today, with the higher gusts along and south of the I-10 corridor.

At Sabine Pass, we are heading into a low tide. High tide will be around 9 p.m. Monday, and continue through 6 a.m. Tuesday.

The expected total rainfall for Southeast Texas is 1-5 inches.

Gov. Abbott issues disaster declaration for Jefferson, 28 other counties in response to Beta