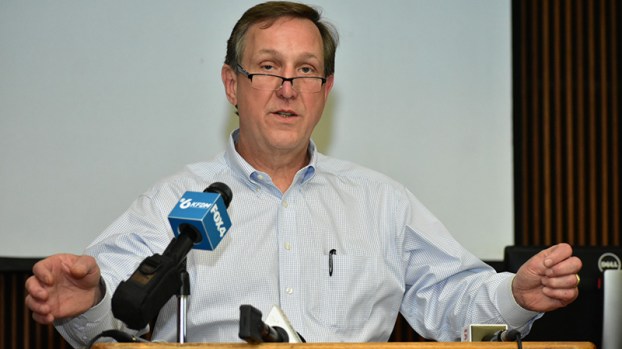 “Based on the 10 o’clock weather call with the National Weather Service and information from the National Hurricane Center, I am not anticipating this is anything more than a medium-sized rain event,” Branick said.

Beta is weaker and has shifted further west as of 10 a.m. Monday, 170 miles from Port Arthur, according to NWS meteorologist Roger Erickson.

Landfall is expected later Monday near Matagorda Bay, which is on the coast just southeast of Victoria.

The storm surge prediction has dropped to 1-3 feet above ground level. It is now expected during high tides across the Texas and Louisiana coast Monday through Thursday.

While rainfall totals vary greatly across the region, Branick cited a forecast of 1-5 inches over three days for Jefferson County. The drainage districts are in position to handle that amount, he added.

Earlier Monday, Gov. Greg Abbott issued a declaration of disaster for 29 counties including Jefferson in anticipation of Beta.

Branick said he spoke twice to Port Arthur Mayor Thurman Bartie before Bartie’s voluntary evacuation order for the Sabine Pass and Pleasure Island communities was issued Sunday morning. A tidal surge has come over the gates at Taylor Bayou on Monday.

Branick believes Sabine Pass and Pleasure Island will have significantly high tides, but he doesn’t want any residents to panic.

“Because of the rain we anticipate, people should be careful traveling and don’t travel down any low-lying areas,” he said.

Most of the county’s largest high school football teams are scheduled to kick off their regular seasons Friday, including Port Arthur’s Memorial Titans and the Port Neches-Groves Indians, who will face off in Port Neches. With Beta expected to clear Jefferson County by Thursday, Branick believes those teams will be OK to move forward with kickoff.

Tropical Storm Beta is weaker and has shifted further west, according to the National Weather Service Landfall will be Monday... read more