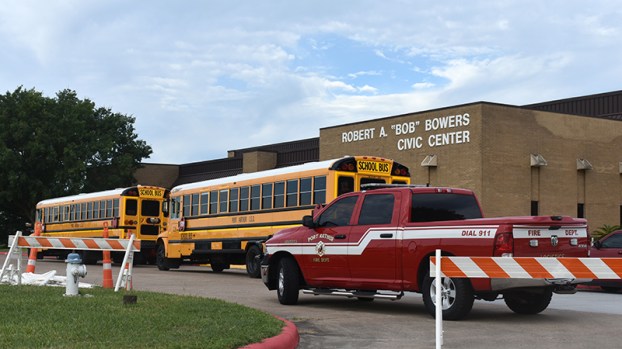 Two Port Arthur Independent School District buses and a Port Arthur Fire Department truck are parked on the west side of the Bob Bowers Civic Center as evacuees prepare to leave in August before Hurricane Laura. (Mary Meaux/The News)

According to the City of Port Arthur, the conference will take place in the lobby of the Port Arthur Police Department to unveil plans for a possible voluntary evacuation of Port Arthur due to Tropical Storm Beta.

A Tropical Storm Warning is in effect from Port Aransas Texas to Morgan City, Louisiana.

Tropical storm conditions are possible within the tropical storm watch area along the south Texas coast on Monday.

A tornado or two could occur Monday near the middle-upper Texas coast or the southwestern Louisiana coast.

According to the National Hurricane Center as of 6 a.m. Sunday, on the forecast track, the center of Beta will move toward the coast of Texas and will likely move inland Monday or Monday night.

Maximum sustained winds are near 60 mph with higher gusts. Tropical-storm-force winds extend outward up to 195 miles from the center. Little change in strength is forecast to occur during the next couple of days before Beta reaches the Texas coast. Weakening is anticipated once Beta moves inland.

Through Thursday, Beta is expected to produce rainfall accumulations of 8 to 12 inches with isolated totals of 20 inches from the middle Texas coast to southern Louisiana, with 4 to 8 inches spreading northward into the lower Mississippi River Valley by mid-week. Flash and urban flooding is likely, as well as minor to isolated moderate river flooding.

The City of Port Arthur Emergency Management Office is alerting citizens that the city may have significant impact from Tropical... read more