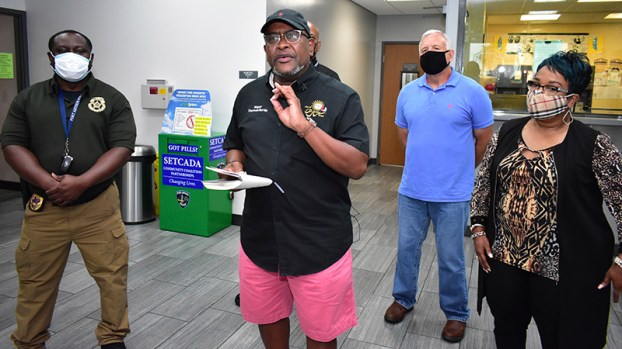 Mayor Bartie: Those in low-lying areas have time now to leave before storm surge

“As the mayor of the city of Port Arthur, I respectfully request the voluntary evacuation of Sabine Pass and Pleasure Island,” Bartie said during a news conference this morning (Sept. 20) at the Port Arthur Police Department headquarters.

“Those two areas in the city of Port Arthur happen to be our lowest lying areas in the city. What we would like is for those citizens to move to higher ground. They have the time now, and if a surge comes, and it will … then they would be probably out of harm’s way being in those areas.”

If Beta remains a tropical storm, however, Bartie does not anticipate calling for a citywide mandatory evacuation as he did with Hurricane Laura, which landed in Port Arthur as a Category 4 storm on Aug. 27.

“If it exacerbates and intensity grows a little higher, this would change, but at the present, we are not anticipating having to do that because we can actually withstand the surge, from what I’ve been told,” he said.

Also described as a tidal surge, it possibly will affect communities outside the Port Arthur Seawall by either Tuesday or Wednesday, said John Owens, the recently retired Emergency Services Coordinator for the city now acting as a consultant.

“…[N]amely Sabine Pass because of proximity to the Gulf of Mexico and not having the levee system being on the other side,” Owens said. “[Texas] Highway 87 is obviously the main artery for transportation between the city of Port Arthur proper and Sabine Pass community. That’s the surge issue we’re looking at, is that the highway could possibly and probably will have water over it. So, therefore, we have to protect the citizens and call for the voluntary evacuation.”

The National Weather Service forecast Beta to reach the middle of the Texas Gulf Coast late Monday or early Tuesday as a tropical storm, with 5-15 inches of rain to come now through Wednesday and a storm surge of 1 to 4 feet likely to impact Sabine Pass, Texas 87 between Sabine Pass and Port Arthur, Bridge City and Orange.

When and if Beta touches down on the coast, Bartie said, the possibility of such a surge then decreases.

“What we’re dealing with is a lot of rain, a lot of water,” Bartie said. “We’ve been working with DD7 [Drainage District 7] to make sure the drains are prepared.”

Bartie said residents are responsible for clearing out any debris from drainage systems in front of their own property.

Garbage crews in Port Arthur, however, will collect trash until 7 p.m. Sunday across the entire city.

“What I’d like you to do more than anything is remain vigilant,” Bartie said. “Remain vigilant, and you make the best choices for your family. … COVID is still upon us, even with these other little things coming in, these hurricanes and everything else, we still have COVID-19, the novel coronavirus.”

Vigilance was also the calling card from Gov. Greg Abbott on Sunday, as the state of Texas announced it has appropriate assets in place to respond and assist communities with potential flooding and rainfall.

The State Operations Center has been activated to Level II (Escalated Response Conditions) in support of the ongoing response to coronavirus and Beta.

“As Tropical Storm Beta approaches, I call on all Texans in the Gulf Coast region to heed the advice of local officials and take the necessary precautions to keep themselves and their loved ones out of harm’s way,” Abbott said.

“The state of Texas is prepared to support communities in the path of the storm, where substantial amounts of rainfall and flash flooding are a significant threat. We will continue to closely monitor the storm and work collaboratively with officials to ensure our fellow Texans are safe.”

Jefferson County and Cameron Vermilion Parishes in Louisiana are already under a tropical storm warning.

Bartie said he informed Jefferson County Judge Jeff Branick about his declaration and added Branick would meet with his Office of Emergency Management officials at 10 a.m. Monday to discuss plans regarding Beta.

Bartie urged loved ones of nursing home patients to “do what is necessary” for them, as the city will not pay the local ambulance service to provide critical care under a voluntary evacuation.

He also recommended nursing homes in Port Arthur “take care of its patients, but taking care of patients doesn’t mean that I, Mayor Pro Tem [Charlotte Moses] or any of these individuals here should tell you what to do. You are the custodians of those individuals. So, nursing homes, you do what is necessary to make sure those persons are safe and you make the right choice in that instance dealing with nursing home individuals.”

City hall will remain open for business on Monday (Sept. 21).

Residents may fill up sandbags at the Port Arthur Pavilion, the Bob Bowers Civic Center and in Port Arthur.

Residents are asked to bring their own shovels.

Bartie has had to prepare for disastrous weather for the second time in a month’s span as mayor, so he’s learned lessons from Laura’s arrival.

“We’ve learned we’ve got to be vigilant,” he said. “We’ve also learned we have to clean up our drains. We also learned something you all may not want to hear, but if you pray, it might go somewhere else.”

The City of Port Arthur Emergency Management Office is alerting citizens that the city may have significant impact from Tropical... read more