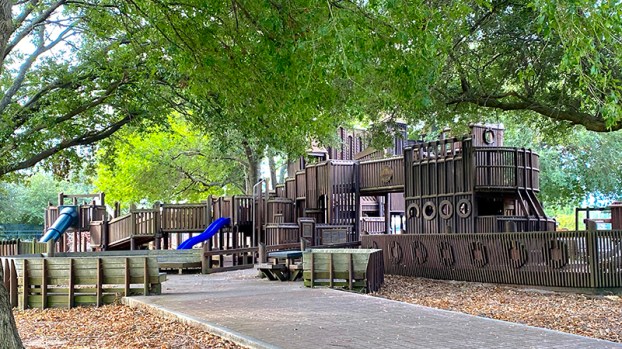 The playground is part of the Neches Riverfront Park. (Cassandra Jenkins/The News)

PORT NECHES — The Port Neches City Council received an email several months ago from an unknown individual showing interest in assisting with repairs to the wooden structure known as Tugboat Island.

The email led to a discussion at Thursday night’s council meeting on the future of the playground.

“That structure is 25 years old and with any type of wooden structure it is showing signs of age,” he said. “Subsequent to direct conversation, we felt it would be wise to conduct an assessment of Tugboat Island.”

The original design firm of the playground, Leathers and Associates, visited the site to conduct an inspection.

The inspection, in conclusion, deemed the playground as unsafe. The structure exceeded its life expectancy by almost 10 years. 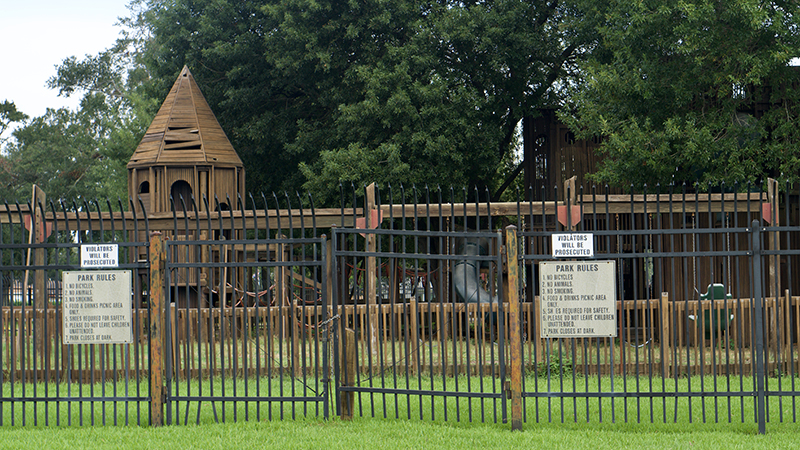 The wooden playground known as Tugboat Island shows signs of wear and tear after 25 years of use. (Cassandra Jenkins/The News)

“We’ve been fortunate that we’ve been able to maintain Tugboat Island,” Wimer said. “The company did indicate that context is important. There are areas of concern, areas of repair that are needed.”

Needed repairs include replacing all of the wood, changing out deteriorating structural and super structural components.

Wimer said this makes the project a huge undertaking.

“We built this structure 25 years ago, and the mayor was heavily involved,” Wimer said. “There was a lot of community support and whether or not that kind of project can be undertaken again — maybe it can, maybe it can’t — it’s certainly going to be a coordinated effort, just as it was last time.”

“As Andre said, I was heavily involved, we built it for $200,000,” he said. “We had 300 people on shift. We had so many people out there that even craftsmen were pushing wheelbarrows.”

Councilmember Adam Anders said Tugboat Island is a favorite among the community.

“I don’t know how many times I’ve drove by and seen field trips from elementary schools from not even just Port Neches, but all over,” he said. “It not only served the citizens of Port Neches and Groves, but surrounding areas.”

Wimer presented the city council with three repair options broken down by cost and life expectancy.

Estimate 1: Minor renovations to the structure include a cost range of $160,000 to $350,000 resulting in an extended time frame by only a couple of years.

Estimate 3: Complete replacement of the structure costing upwards of $650,000 to $1 million for roughly another 20-25 year life expectancy.

Johnson said the structure likely needs to be torn down and replaced.

“It’s tough,” he said. “I never dreamt that 25 years would pass that quick. The kids that are playing on that now, their parents weren’t even born when we built it. That’s all I can say. Work needs to be done, but it’s time for the next group to do it. I’ve done my time on it.”

Tugboat Island has been closed alongside all other playground structures since March due to COVID-19 restrictions.

As city officials discuss reopening all playgrounds to the public in the near future, Tugboat Island will remain closed indefinitely until a decision is made.

Indictment: Victim slaps gun from face before it fires

GROVES — A Nederland woman has been indicted for deadly conduct after police say she pointed a gun at another... read more