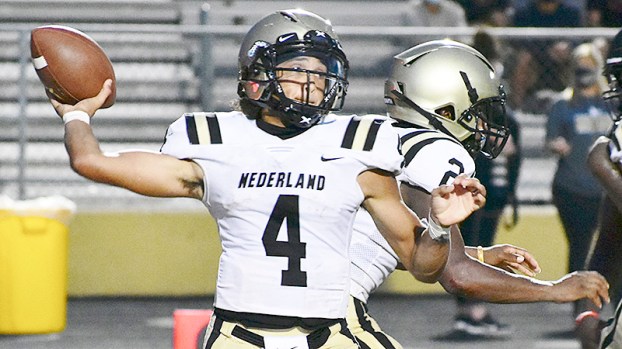 Nederland quarterback Rene Cunningham throws out of his own end zone during the third quarter of Thursday’s home scrimmage against Memorial. (I.C. Murrell/The News) 9-17-20

NEDERLAND — Rene Cunningham would have been hard-pressed to find a grander stage for a formal audition as Nederland’s starting quarterback.

Nederland publicly introduced its first artificial turf at Bulldog Stadium on Thursday night, and Cunningham helped break it in by throwing two touchdown passes in a 17-13 scrimmage victory over Memorial. The scrimmage was played in a regular game format.

“I felt good out there,” Cunningham said. “I felt good being out on the field against a real opponent.”

Cunningham tossed a touchdown screen pass to fellow senior and running back Josh Mazyck to cap the opening drive. Cunningham ended the first half by finding senior wideout Kade Scott on a cross route in the end zone.

Another senior, Kerrington Broussard, caught a big-play pass to set up Scott’s touchdown.

“We were real pleased with how Kerrington was in the shape he was in, playing offense as many plays as he did while playing defense,” Barrow said of Broussard, who also works in the secondary and has played linebacker in past years. “He’s dedicated himself and I think he’ll help us a lot there. Rene’s comfortable with him, along with Kyndon [Fuselier] and a lot of other guys.”

Cunningham is playing quarterback for the first time after converting from wide receiver, but learning his new role in a season altered by a health pandemic has proven no problem.

“It’s just the athlete in me,” Cunningham said. “I bring it to the team. I do what I have to do for the team.” 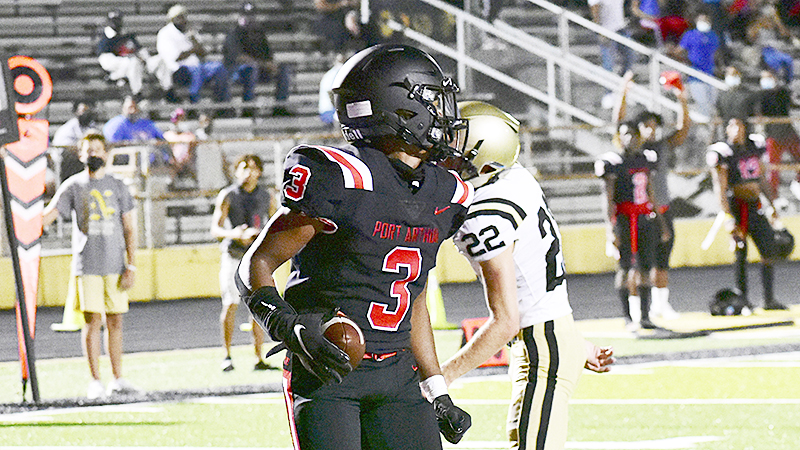 Memorial and Nederland played in the preseason for the third year in a row after spending two years together (2016-17) in District 22-5A, in which the Titans won both meetings. This was the first time, however, Nederland beat Memorial in a scrimmage.

“We had to force ourselves by playing into shape,” third-year Titans head coach Brian Morgan said. “We had to cut down the schedule by not having an extra week of practice. We were down one scrimmage, so I think you could see it today. It’s nothing like game shape, and those guys need to run around and play a few quarters and get hit and play series and long plays. That stuff is hard to simulate in practice. That, we definitely needed to see. I think we came out relatively healthy, which was good.”

Memorial did all of its scoring in the second half. Junior Jah’mar Sanders, a returning starter wearing a red jersey to avoid being tackled, floated a pass that was deflected and juggled into Tony Brooks’ hands in the end zone in the third quarter.

Maleek Jones’ interception of Chandler on the opening play of the second half set up the drive.

Sanders overcame a tough first period in which the Bulldogs picked him off three times. Jacob Kotz and Jaice Beck pulled down passes that bounced out of receivers’ hands, and Lalo Flores intercepted a pass in 1-on-1 coverage.

But Morgan was still pleased with Sanders’ management of the offense.

“Really, when you look at it, I think he was perfect as far as his decisions,” Morgan said. “In the first half, he had two bad bounces. He had two tipped-ball interceptions he doesn’t like to get, but it is what it is. Even the ball he threw to Tony on fourth down, he’s kind of scrambling, trying to make a play. It didn’t really affect us any. I thought he really made some good decisions the whole night.”

Later in the third period, Payne Barrow converted a field goal to expand Nederland’s lead to 17-7.

The Titans pulled to within 17-13 on the final play of the game, as Ilijah Williams fired a short pass to Kelby Blanchette.

“Ilijah Williams did a really good job,” Morgan said of the junior. “He was able to run around and play live. He operated pretty well. We have a lot of confidence in him.”

Each team came up big with a fourth-down stop in the red zone. Memorial’s Christian Thomas registered a sack to stop a Nederland drive, and a long run by Memorial’s Adrian Hayward led to a Nederland goal-line stand.

“I thought the defense came out and played hard after we kind of settled down,” Morgan said. “I guess I was most happy with the second half. We came back and rebounded from some adversity, focused in, made plays and got going. So, that was good to see.”

NEDERLAND — One dress rehearsal on the new Bulldog Stadium turf was all Rene Cunningham needed to show off his... read more