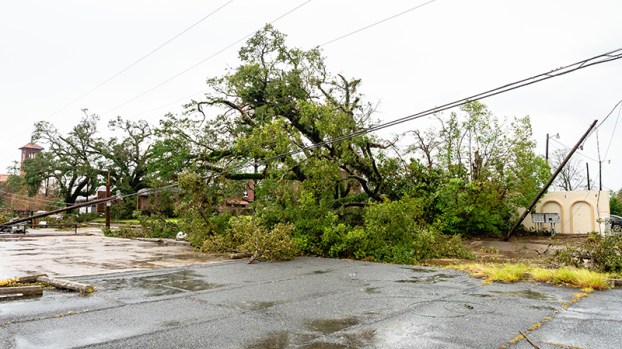 Storm damage on and near Ryan St in Lake Charles, Louisiana.

I.C. MURRELL — Follow your common-sense, never take a chance on a downed wire

Driving through a city can be challenging sometimes, even if it’s one where you live.

The night of Aug. 28, one day after Hurricane Laura skirted by Jefferson County, trying to get home felt more like avoiding Blinky, Inky, Pinky and Clyde in Pac-Man, yet these colorful 8-bit ghosts were nowhere to be found.

The two main antagonists on this night were area-wide darkness and downed wires. Darkness can be defeated, but downed wires can cost one the game of life. No cherry can make anyone invincible.

Laura kept quite a few of us in the dark for nearly a week, if you remember. Many were left to figure out how to stay cool in the warm summer nights that followed and how to stay nourished without a running refrigerator.

Maybe it was a search for an open restaurant that led me to scramble down FM 365 to Nall Street, then Magnolia Avenue. Once that search failed, the easiest thing was to continue south — or is it east? — toward home.

My early education on safety kicked in and I just turned around. Meanwhile, some truck headed in the opposite direction cruised right through the line.

Dead wire, easy to assume. But it’s really not worth the risk.

If a harrowing reminder is needed to explain, think about a man from outside Texas working with a debris removal company in Newton County being electrocuted earlier this week. A TV station reported an arc from a power line hit a lift boom to a truck and trailer, and the charge was believed to pass through the boom to the truck and trailer the man was touching, leading to electrocution.

That is just an unfortunate scenario and, minus the result of a complete investigation, amounts to a tragic accident. But it really doesn’t take tragedy for common sense to reign, does it?

Mind you, I grew up in the backwoods, and two things I don’t play with are flooded lowlands and downed lines. Luckily, there’s a backstreet “up the hill” we can take in case rain blocks our entrance into the business district, but watching out for lines in the neighborhood up that hill is a different story.

Those streets are no wider than some of the backroads here in Port Arthur, so I get turning around can be a hassle.

Still, there’s such a thing as common sense. Trying to cut through a Port Neches neighborhood on one street wasn’t worth it when I saw another line down. Yet, some brave soul made it through just fine.

Maybe I’m just too cautious, right? You darn straight I am.

Who has time to distinguish a power line from a cable line or telephone wire that’s on the ground? Who cares if others know the line isn’t hot?

That’s a job for power crews. So, call your local power company if you see a line down.

“All lines that are on our poles aren’t necessarily Entergy,” Fletcher said. “You have AT&T and cable wires as well. Just because there’s a line down doesn’t mean that’s Entergy, but if we are notified that there’s a wire down and we find out that it’s AT&T or the cable company, we notify them. If it’s an Entergy wire, we go right to the site to look into it and restore the wire.”

Hanging or downed lines are not a novel concept, but we can do our part to fix each problem at a time.

Remember what you were taught in school:

Avoid hanging or downed lines, pick up the phone and report them to Entergy.

Then, you can live another day to play Pac-Man … on a console, of course.

Crime happens. From a rowdy party that led to a disturbance and one group firing shots into the air in... read more