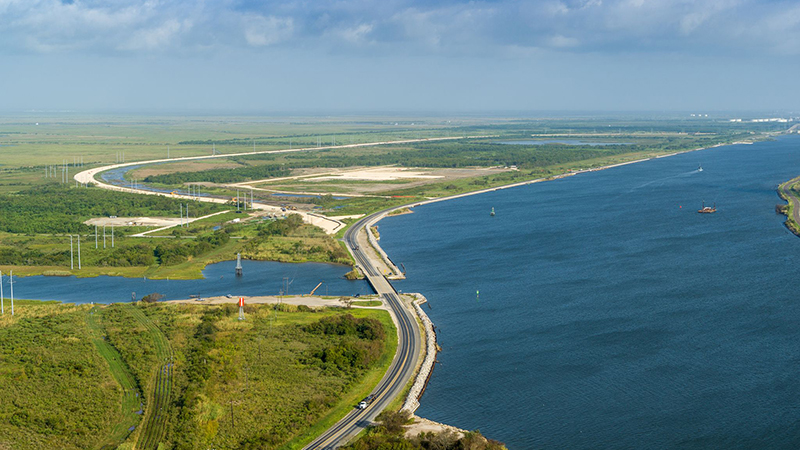 The leader of the Port Arthur Community Action Network is pushing for more employment of Port Arthur citizens and interaction with the community from a liquefied natural gas company undergoing a project expansion.

John Beard, the founder and CEO of PA-CAN, says he lives on the city’s West Side, not far from the site of Port Arthur LNG on Texas 87.

“What you’re bringing here are jobs and opportunities,” Beard said. “But unfortunately Port Arthur does not work. We have some of the highest unemployment in the state of Texas, more than twice the state average, and that affects our local economy, and it affects the quality of life for our citizens. Greater than that, the quality of life is affected by the pollution we have from a number of sources.”

Beard aired his concerns during an audio-only Texas Commission on Environmental Quality public hearing on three air quality permits Port Arthur LNG filed — one regarding prevention of significant deterioration (PSD) and another authorizing construction of a facility from the intersection of Texas 82 and 87 and traveling 5.3 miles to an oil field road.

The proposed facility will emit carbon monoxide, nitrogen oxides, organic compounds, particulate matter, sulfur dioxide, sulfuric acid mist, greenhouse gases and ammonia, according a notice of application and preliminary decision for a permit from the TCEQ.

“The executive director has determined that the emissions of air contaminants from the proposed facility, which are subject to PSD review, will not violate any state or federal air quality regulations and will not have any significant adverse impact on soils, vegetation, or visibility,” the notice reads. “All air contaminants have been evaluated, and ‘best available control technology’ will be used for the control of these contaminants.”

“… I find there to be some inconsistency with that because a number of times, I and others who live in this community have informed TCEQ only, for those reports to be followed up after the fact, when the damage is already been done,” Beard said, using Hurricane Laura, as well as shutdowns and startups at local refineries as examples.

He added TCEQ’s testing equipment isn’t giving accurate readings on the air quality because residents are more sensitive to the pollutants.

Work began last November on relocation of a 3.5-mile stretch of Texas 87 near Keith Lake and impacted pipelines to provide a safer route to the proposed Port Arthur LNG facility away from the Intracoastal Waterway. The second phase of relocation has begun and involves material settlement for the new portion of the highway.

Port Arthur LNG spokesperson Anya McInnis said the company has received permits needed to construct the base project, which included Trains 1 and 2. The company submitted an application for expansion to TCEQ on Sept. 12, 2019.

“In addition to permitting Trains 3 and 4, Port Arthur LNG used this application process as an opportunity to update facility designs for Trains 1 and 2,” McInnis said.

As far as community involvement regarding the expansion project, McInnis added the project team hosted a community open house in Port Arthur on Aug. 13, 2019.

McInnis detailed other outreaches Port Arthur LNG has organized since that time.

“The Port Arthur LNG team has hosted information events and/or made more than 50 presentations about the PALNG project since August 2019 with local organizations including schools, chambers of commerce, city and county departments, economic development and trade groups, nonprofit organizations, safety and waterway agencies, residents and more,” she said. “In November 2019, the Port Arthur LNG team also hosted a community reception and open house at Sabine Pass School with its project contractors. More than 250 local residents were in attendance at these events.”

Jim Thompson, permit and compliance manager with Sempra LNG, the parent company of Port Arthur LNG, said during the hearing he anticipates 200 full-time positions associated with the project, with 80 of them to be filled by local employees.

Along with engineering, procurement and construction contractor Bechtel, Port Arthur LNG plans to employ “upwards” of 5,000 people during the peak of construction, with many being local residents.

“PALNG has committed to Jefferson County and Port Arthur to hire local whenever possible and use local goods and services for its needs,” Thompson said, naming catering, cleaning, laundry and delivery among them.

Ben Hansen, a TCEQ permit reviewer assigned to the case, broke down the air quality permit review into three components:

A preliminary decision from TCEQ executive director Toby Baker is to issue the permits but TCEQ officials did not offer a timeline for when they will be issued.

“The proposed project meets all requirements of the Texas and Federal Clean Air Act,” Hansen said.

Information related to the permit application is available for viewing and copying locally at the TCEQ Beaumont Regional Office, 3870 Eastex Freeway, and the Effie & Wilton Hebert Public Library, 2025 Merriman St., Port Neches, as well as online at: www.tceq.texas.gov/goto/cid.