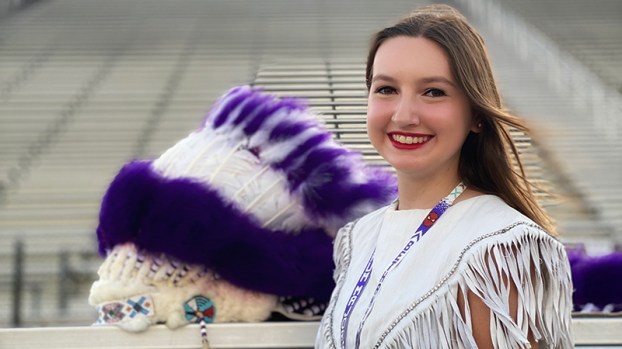 PNG senior, Bethany Storms, is one of three drum majors for the 2020-21 Indian Band. (Courtesy photo)

PORT NECHES — Bethany Storms is one of three drum majors for the 2020-21 Indian Band at Port Neches-Groves High School.

Selected out of a pool of more than a dozen, it is the PNG senior’s proudest accomplishment.

Music is at the center of her soul.

“I’m energetic, caring, friendly and I love music,” Storms said. “Music is a big part of my life. It’s really always been part of my life. Both of my grandmothers are in a band, and on my mom’s side they’ve released CDs they’ve made, so I grew up listening to music.”

Storms first joined band in the sixth grade after trying out for a host of extra-curricular activities that all fell flat.

“I was in softball, soccer and dance, but none of those things stuck for me,” she said. “I finally joined band and I loved it. In middle school you audition by playing all of the instruments and seeing which one you are best at. I was best at trumpet. I stuck with that throughout middle school and high school.”

After playing the trumpet for a couple of years, Storms realized she wanted to do more than just be part of the band. She wanted to be a drum major.

“I thought it would be a great opportunity for me,” she said.

“She is the ideal student, at least for us,” he said. “She practices. She is prepared for class. She takes care of her business, and as a drum major she helps other people with marching and playing. She’s a good person, and I am glad to have her.”

Wells said during auditions, Storms stood out for her personality and human interaction. She was named drum major along with Cora Pitts and Emma Seymour.

“The first thing that we see in the audition stage is the mechanics of playing an instrument, but really we can teach that to anyone,” he said. “What we saw with Bethany is the way she can communicate with others. The human element of it and the ability to lead and share the expectations of what we want. We knew that she and the other two drum majors would do that effectively. She is going to be a great leader.”

Storms is a leader in more ways than one. 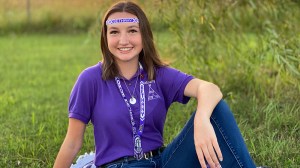 The Labelle native is a member of the National Honor Society, Key Club, officer in First Priority and a leader in the Indian Tribe and Indians Give organizations.

Outside of school, she is a leader for her youth group at Encounter Church.

Giving back is a huge part of her life.

The drum major is also a straight-A student.

“Education is important to me because I want to have a successful career,” she said. “I enjoy learning new things and I hope to have a vast amount of knowledge in the future.”

Storms’ future includes playing in a collegiate band and graduating with a degree in astrobiology, the study of life in the universe.

She ultimately hopes to work for NASA.

“An astrobiologist takes rocks, water or plants that the rovers find on other planets and run tests on them,” she said. “They focus on the biology of space. That’s what I want to do because I’ve always liked space and the idea of space, and science has always been my favorite subject.”

As picking a college looms in her mind, Storms said she also wants to spend time being present in high school during her senior year.

This year she is most excited about football season and leading the band through marching and concert season.

“I was very honored to be selected as drum major,” she said. “I am very grateful to have the opportunity to be in this position. I will do everything I can to be there for my band and help in any way I can. I want them to know that I am an approachable person that they can come to for anything.”

“It’s a very exciting experience for me,” she said. “In middle school we get to go to the home games and watch the seniors perform, but it’s not the same. As a senior you get to march on the field, decked out in uniform and perform the Marching I. It’s incredible and will always be one of my favorite moments in time.”

As Storms charges into her senior year and the rest of her life, she reminds herself of her favorite quote from Oscar Wilde:

“When it rains, look for rainbows. When it’s dark look for stars.”

NEDERLAND — An altercation between two groups of people in Nederland over the weekend led to shots fired, authorities said.... read more