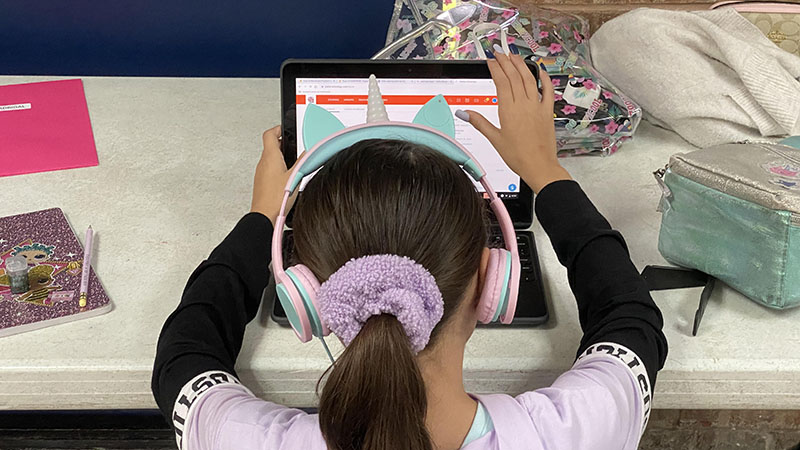 Children get ready for virtual learning at the YMCA in Port Arthur in September 2020. (Chris Moore/The News)

When the Port Arthur Independent School District elected to shut its doors for the first four weeks of school due to the coronavirus pandemic, the YMCA stepped up to help provide childcare for parents who needed a place for their children to learn virtually.

As virtual classes began at 9 p.m. Thursday, children from prekindergarten to high school logged on to their electronic devices with their headphones over their ears to begin the school day.

“The Y is here to serve,” said Kevin Pearson, YMCA of Southeast Texas CEO. “We knew there were parents that would be working, don’t have the technology capacity at the home or in some cases, just can’t help their kids out with the homework. We rolled out of summer and just extended it, really. Right now, we have more kids in the virtual learning program than we did in the last two weeks of summer.”

When the program began last month, fewer than a dozen children were on the roster. The program currently has 18 students and has room to add more, if needed, Pearson said.

“If we were to get more kids, we have another room we could move them to,” he said. “We could even go to the racquetball courts and stuff.”

Pearson said the program’s greatest challenge has been getting students into the routine, especially after an extended summer after schools shut down in March.

“The first three days, we had to have more staff just to get it going,” he said.

Pearson said if the schools were to remain shut down or a majority of the parents elected to keep their children out of school when they open back up in a couple of weeks, the YMCA would keep the program going.

“For the parents that don’t feel comfortable letting their kids go back, we will be here,” he said. “If it’s two or three kids, we couldn’t keep it going, but if it is a dozen kids, we will continue.”

To help break up some of the monotony, the YMCA allows students time to step away from the tablets and desks and relieve some energy on the playground and gym.

“They need brain breaks,” Pearson said. “We know children are supposed to be limited to two hours of screen time a day and yet, they have to be online for at least four hours. We try to let them have a break from that.”

Program Director Brittany Mercer said being able to help parents and children is making a difference.

“It’s a great feeling,” she said. “Being a parent, myself, it helped me to be able to get back to work. I know the challenges of trying to get back to work but also making sure your children have an education. We’re here from 7 a.m. – 6 p.m. from the time parents go to work to when they get off.”