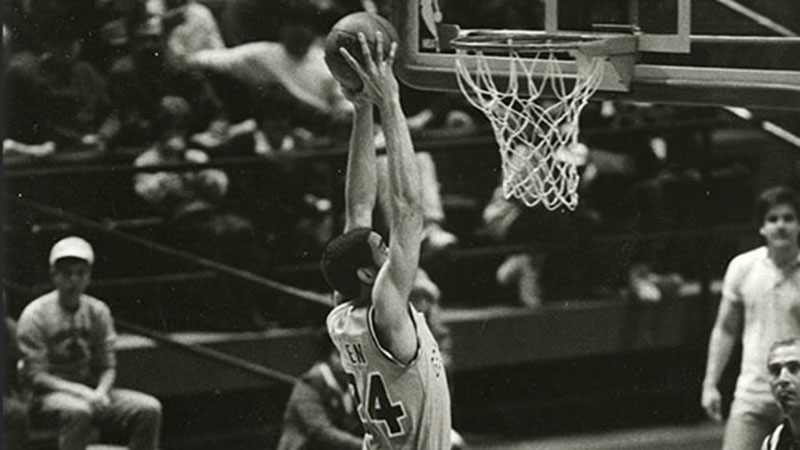 Coaches put on their finest threads to lead their troops to victory on a hardwood battlefield, and those with any fashion sense take note. It’s called dressing for success.

Rick Pitino hardly ever coached a game without the finest Italian-cut suits he could find. Roy Williams brought plaid back in fashion when he made the move from Kansas to North Carolina. Nolan Richardson accelerated the shoe game — forget Nike — with Gator Boots.

John Thompson? That’s a big man who dressed right, as well. You knew who he was with a bright white towel over the right shoulder of his suit.

(Why Nike didn’t make millions off Georgetown-themed face towels at the height of its popularity, I’ll never know.)

Thompson also mastered the art of walking tall, standing for fairness and equality and demanding academic achievement from his players during a time the NCAA was grappling with issues in that very realm.

His 1984 national championship victory was a watershed moment in African American history. After decades of Black contributions to the game, a towering figure who spoke out against social injustice issues transcending basketball took a Catholic university program in the nation’s capital, built it into a cultural icon (my sister owned a Georgetown practice jersey when I was little) and reached the top of the summit, silencing naysayers about his and other Black coaches’ ability to win in the college realm. (It should be noted, however, NBA coaches like Al Attles and Lenny Wilkens had won Finals in the 1970s, and Bill Russell did it in a player-coach role twice in the 1960s.)

Gamble coached four Lincoln High School teams to state championships in an eight-year span, one of them coming the same year Thompson’s Hoyas were crowned in the Seattle Kingdome.

“… To see John Thompson succeed like that was more proof we can do as well as anybody when given the opportunity,” Gamble said.

For a deeper connection to Port Arthur, Thompson signed Anthony Allen the night he delivered a keynote speech to Gamble’s 1986 state champion Bumblebees.

Allen didn’t put up Allen Iverson- or Patrick Ewing-like numbers at Georgetown. He played a role in a bigger scheme, one in which he thrived at Lincoln, one that stressed everyone doing his part on defense to create offensive opportunities, a scheme that lives on in Alden Lewis’ program today at Memorial High School.

Being a part of something bigger than oneself, opening doors for those who just need an opportunity and even marketability all explain Thompson. I saw that unfold through a television screen growing up, whether Thompson’s Hoyas were pulling March magic from under their sleeves or he was getting into an argument with Indiana’s Bob Knight over crunchy or soft tacos as a recruiting tool in a 1996 Taco Bell commercial. (Pitino settled the issue and won the recruit with a “Double Decker” taco, if not Kentucky’s national championship that year.)

That’s how powerful basketball is. For one, it sells products when it doesn’t sell itself.

For another, highlighting social and academic issues for the betterment of mankind while building a consistent powerhouse makes all the effort that goes into playing and coaching the game worth it.

Mind you, Richardson set an example for well-dressed and outspoken success for an Arkansas kid like me. It’s hard not to think about Thompson’s walkout from a 1989 game over NCAA Proposition 48 without thinking about Richardson leaving the court in protest of bad calls during 1990 national TV game at Texas. (Arkansas won in overtime and beat Texas four times that year.)

Richardson stood for a lot, but Thompson was the prime example of what a strong leader looks like.

I never played for the Hoyas or the Razorbacks, but I’m better for his and Richardson’s examples.

I.C. Murrell is the editor of Port Arthur Newsmedia. He can be reached at 721-2435 or at ic.murrell@panews.com.