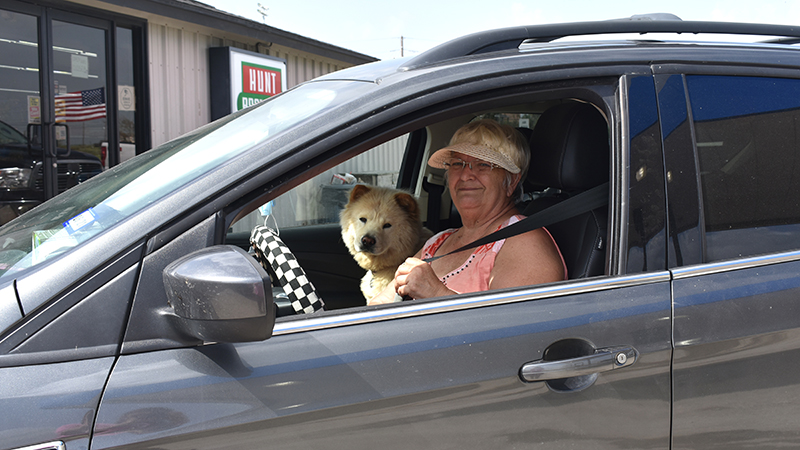 Sabine Pass resident Diana Trahan and her chow dog Sadie stopped at Sportsmans Supply for ice as they are dealing with the loss of electricity. Trahan’s new generator isn’t working so she’s been living out of her car for the most part. (Mary Meaux/The News)

SABINE PASS — The signs on the gas pumps at Sportsmans Supply in Sabine Pass show the store — which is currently the only one in the town — is “open” with a smiley face drawn in the letter “o.”

Inside, the air is cool thanks to generators and the shelves are stocked as customers pile in on Tuesday.

The town is still without power and a cluster of utility-looking trucks parked at and around New Beginning Church on South Gulfway Drive (Texas 87), where crews from North Houston Pole Line were in groups discussing their plans to right the poles knocked awry by Hurricane Laura.

Employees Curtis Tappy and Anthony Huerta were on the back of one of the trucks preparing to raise an American flag, something the other North Houston Pole Line trucks had done. 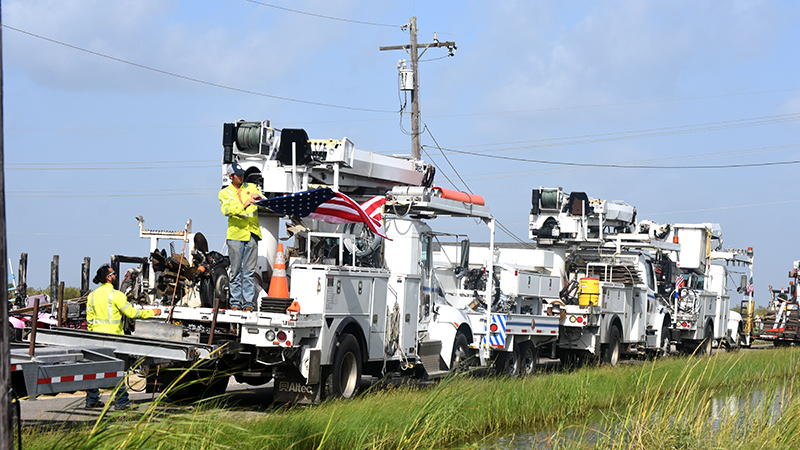 Huerta said they had just left Beaumont before arriving in Sabine Pass. The men were unsure how long the restoration project would take but said there were approximately 14 crews with five to six men per crew in town.

Sabine Pass resident Diana Trahan and her chow dog Sadie stopped at the store for ice, something she had been doing since arriving back in town on Friday. Her situation of living with no electricity is one shared by many across the area.

“We have a brand new generator that’s a lemon. We ran one 5-gallon can of gas through it and cannot get it to crank. So I made a bed and breakfast out of the car,” Trahan said.

But bags of ice don’t last long and aren’t intended to freeze foods to keep them from spoiling. The Trahans lost all of their meat, she said.

Her home is elevated and built sturdy but the storms take their toll even after living there for 25 years.

“We’re selling,” she said. “This was my last hurricane here. I’m not healthy. There’s one way in (town) and one way out. I have heart problems, COPD (chronic obstructive pulmonary disease). I’m not a 30-year-old anymore.” 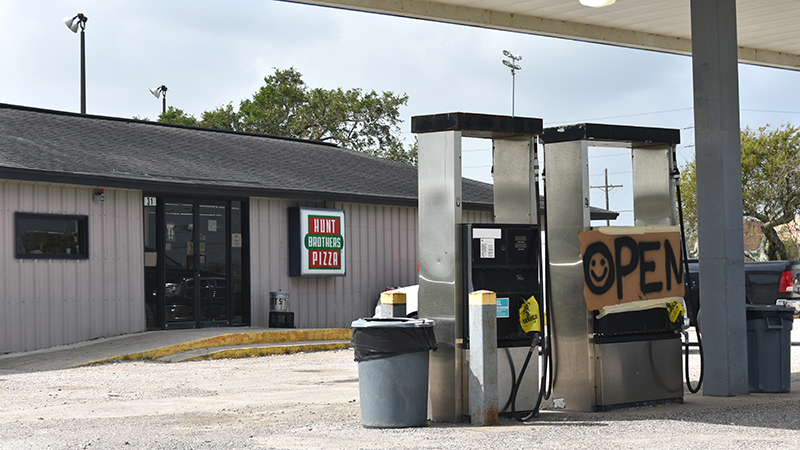 “Open” signs on the gas pumps at Sportsmans Supply in Sabine Pass invite customers in. The town is without electricity following Hurricane Laura and the store is being run on generators.

David, a Groves resident who did not want to give his last name, stopped by the store for a few items before heading out in his 1990 Suzuki Samurai to go fishing. The back of the small yet rugged vehicle was filled with fishing gear.

David worked with Beaumont EMS and stayed during the hurricane for work. His home fared well, except the loss of power meant the loss of food in the refrigerator.

“We lost everything Friday so we (he and a friend) came out here to try and restock the fish,” he said.

The town, which is part of Port Arthur, is separated by 11 miles of two-lane roadway where dump trucks are frequent travelers due to industrial construction in the area.

Down the road at Keith Lake, families and friends were enjoying the great outdoors.

Jami Quibodeaux and Brandon Burbage did well fishing the day before and decided to go again on Tuesday.

Quibodeaux, who lives in Groves, was still without power and said inside her home was 87 degrees, so she went fishing.

The Edwards family of Mont Belvieu was set up a little ways down the gravel road. Son Nathan Edwards and dad Dominic Edwards threw their lines in the water as mom Claudia and daughter Viviana stood nearby.

The family did not have any storm damage and said they were very blessed but felt horrible for the victims of the storm. The Edwards family is keeping the ones affected by the storm in their prayers and they have volunteered with their church in outreach in Orange.

Hurricane Laura came ashore near the Texas-Louisiana border on Aug. 27 as a Category 4 storm. According to the United States Geological Survey agency, Laura caused the Neches River to slow, then reverse flow temporarily as the water and wind pushed ahead of it.