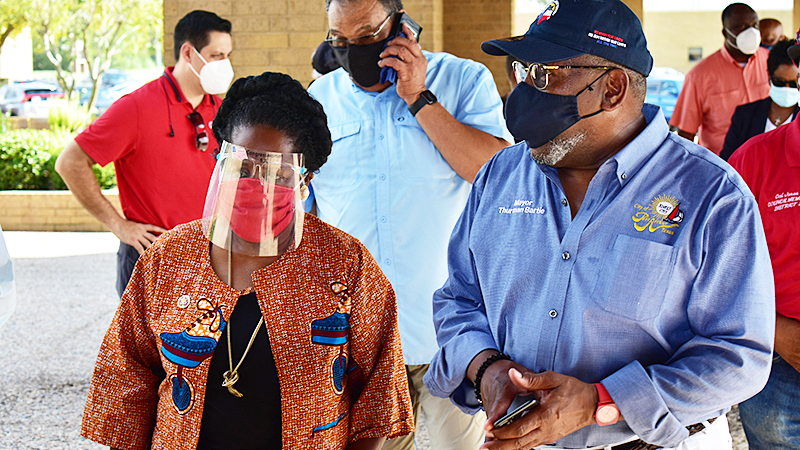 U.S. Rep. Sheila Jackson Lee praised Port Arthur Mayor Thurman Bartie for his decision to issue an early mandatory evacuation order ahead of Hurricane Laura during her visit to the city Monday. 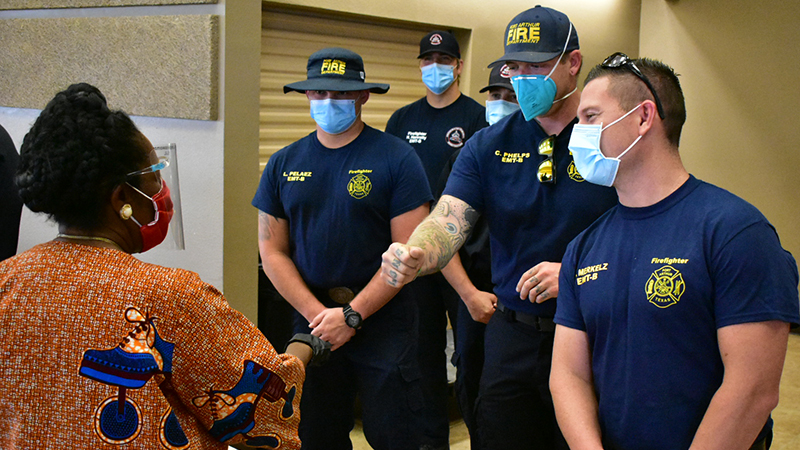 “It is without a doubt, your leadership saved lives,” the Texas District 18 representative told fellow Democrat Bartie in the civic center lobby. “I like a person who [didn’t worry] whether or not he would be criticized by seeking or suggesting early evacuation. All of our mothers and fathers have told us: it’s better to be safe than not safe and to advance what is right and worry about criticism later in a hurricane or a situation of danger.”

Jackson Lee’s district includes areas in and around Houston.

Bartie was the first Jefferson County mayor to issue the decree, announcing it Aug. 24. That and similar orders in the county went into effect the next morning.

Jackson Lee toured the Bob Bowers Civic Center just ahead of the arrival of evacuees from the Walker County Storm Shelter and went to Barbara Jacket Park at Gilham Circle for an ice and water drive at the invitation of Bartie.

Jackson Lee plans to push for housing and better energy infrastructure in Port Arthur and Jefferson County during Congress’ appropriations process. Lee indicated she would rely on recommendations from local leaders regarding housing needs. 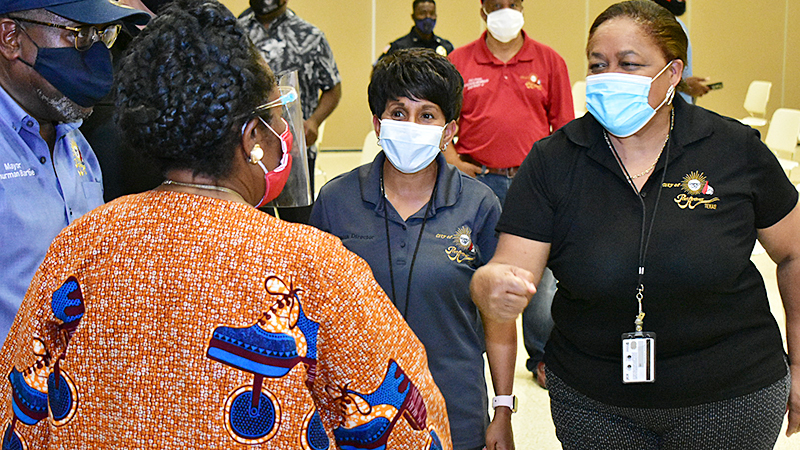 The number of outages among Entergy Texas customers peaked at 291,300, the energy supplier said.

“I’m told the power outage is enormous, and I know the provider has lost at least seven of their eight facilities,” Jackson Lee said. “That’s something we in modern-day America have to address because we are in the hurricane. We are in the eye of the storm. I think we will be looking at the infrastructure of power, housing and then we will rely on local communities as to what the most devastating part of their efforts over time, just as we did in the CARES Act and the HEROES Act that we’ll pass as it relates to the [coronavirus pandemic].”

A bill for the HEROES, or Health and Economic Recovery Omnibus Emergency Solutions, Act was passed in the House on May 15 and is awaiting a vote in the Senate. The act proposes a $3 trillion stimulus package.

The CARES, or Coronavirus Aid, Relief, and Economic Security, Act was signed into law March 27 and provides direct economic assistance to small businesses and their workers.

“This community and the state of Texas will be on our minds in terms of the necessary funding to get people back on their feet,” Jackson Lee said. “We’re already experiencing the pandemic impact, and we expect to be able to pass some of that support, and particularly I want to express those who are unemployed my concern as well as those who are experiencing concerns with their businesses. Businesses are the rock bed of our communities. Our small businesses, we don’t want them to think we’re ignoring them. As we get back to Washington, I can assure them they will be getting extra funding to help our small business during the pandemic and then for those small businesses impacted by Hurricane Laura.” 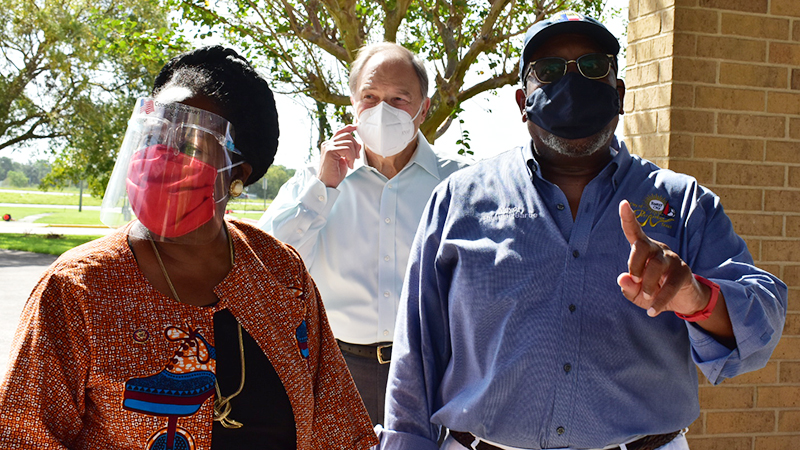 “It shows value with her busy schedule to come to Port Arthur and want to see face-to-face what’s going on,” Kinlaw said. “It makes you feel very good that you have someone at the Washington national level you have someone doing that. That’s what we need.”

Port Arthur Health Department workers were on hand to assess basic health needs of returning evacuees but are waiting for more coronavirus tests to offer at the site, department Director Judith Smith said.

Jackson Lee cautioned that the health pandemic is ongoing and citizens need to continue to observe prevention measures to avoid a spike in the number of cases.

“Every time someone believes that we are through and they can do things that have not been directed — they can have close parties or see the firemen and firewomen looking because they’re the ones who have to take people out of their homes to hospitals. I’m concerned about them because we don’t do what we’re supposed to do, which is wash our hands, socially distance and wear a mask,” Jackson Lee said. “And I know we are social people, but as we have seen opening colleges and opening schools, as much as we want to get back to that, if we don’t follow instructions, we might end up with a hotspot. If we have another hurricane and we have hotspots, even in Texas, that will be a double impact we have to address.”