Trump on Laura’s destruction: ‘I’ve never seen anything quite like it’ 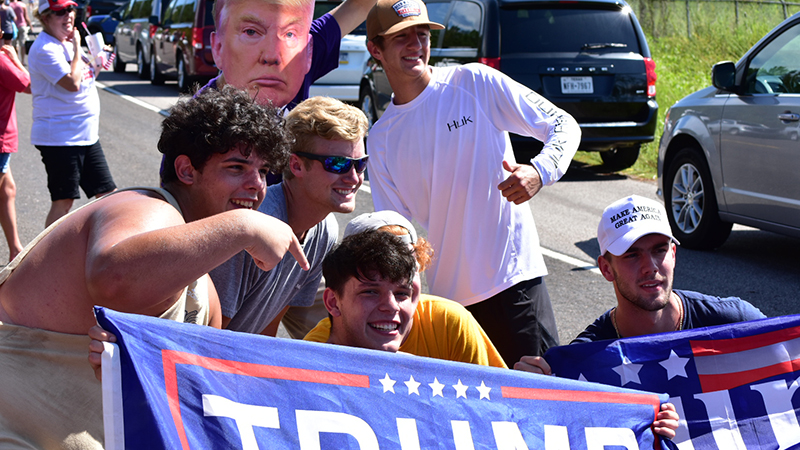 ORANGE COUNTY — President Donald Trump said he had “never seen anything quite like” the devastation Hurricane Laura left behind in Southwest Louisiana during a closed roundtable discussion with Gov. Greg Abbott and other local and federal officials at the Orange County Convention and Expo Center on Saturday.

Trump also noted Southeast Texas was very fortunate to not suffer the level of wrath he witnessed during a tour of Lake Charles earlier in the day.

Trump surmised Laura went up to 185 mph and hit the Gulf Coast at 150 mph, the latter figure the maximum sustained wind confirmed by the National Weather Service at midnight Thursday.

The storm surge went over 10 feet in Cameron, Louisiana.

“It came very quickly,” the president said. “They were looking at that as a storm, and all of a sudden, that storm became a monster.”

Laura was the strongest storm Louisiana and Texas faced in 150 years, according to Trump, but Texans were “a little bit lucky” the path didn’t go in their direction, he added.

During his visit to Louisiana, Trump said he discovered trees ripped out from the roots and pine trees broken in half.

“I’ve never seen anything quite like it,” he said in Orange County. “…You just don’t see that kind of power. We went through something that was pretty bad. I don’t think you [in Texas] got anything like that, and that’s good.”

More than 10,000 residents evacuated to shelters throughout Texas and more than 3,300 hotel rooms accommodated evacuees, with more than 2,200 of them coming from Louisiana, Abbott said. Evacuees were placed in what the governor called “non-congregant settings” in order to avoid the spread of coronavirus.

“I believe we will succeed in getting through Hurricane Laura without spreading COVID-19,” he told Trump.

Abbott credited the president and his administration with quick action in their hurricane response, a common theme among local officials in the aftermath of Laura.

“People don’t know this, but on midnight [Thursday], as the storm was crossing the shoreline, you called me,” Abbott told Trump. “That was 1 a.m. your time. And then, we spoke again the morning after. You have been there for us every step of the way helping us. Never have I seen such a swift response to our request as we received from [FEMA] Administrator [Pete] Gaynor.”

U.S. Sen. Ted Cruz (R-Texas) said Texans grieve for Louisiana over the impact of Laura, which has led to 16 deaths there and in Texas (some due to carbon monoxide poisoning from improper use of generators). He added Texas is stepping up to help Louisiana residents heavily affected.

“Compared to what we’ve seen in the past, Texas could have gotten hit much worse,” Cruz said.