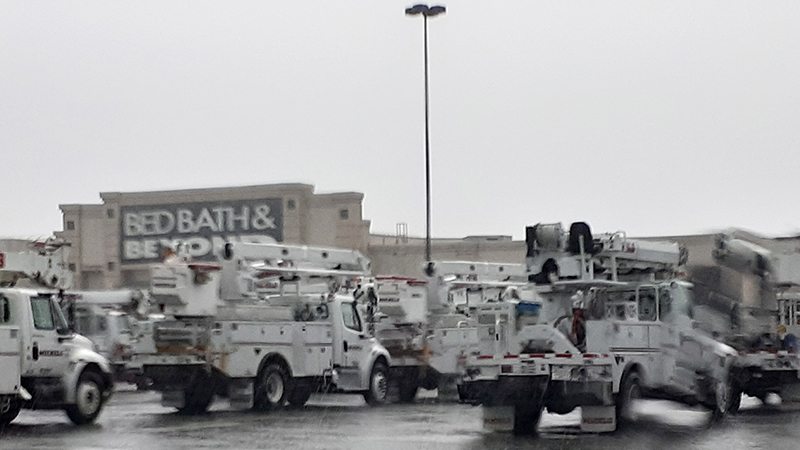 “When we have a storm of this measure, we rely on outside resources that help us restore power,” she said. “We work with folks or other utilities and offer aide to each other in times of great need like this. It is a normal part of our storm operation. When you have something with this amount of damage, you are trying to get people started as quickly as possible and we bring in the needed resources to do that.”

More than 6,000 Entergy workers of all levels are in Texas assisting the company in restoring the loss of power for nearly 64,678 Jefferson County homes and businesses.

Payne said it is a huge effort to restore power following a hurricane.

“We have bucket trucks, contractors and people organizing the efforts from operating centers,” she said. “It’s a huge undertaking for us, so we really brought in a lot of folks to safely and quickly restore the power after this very strong Category 4 hurricane.” 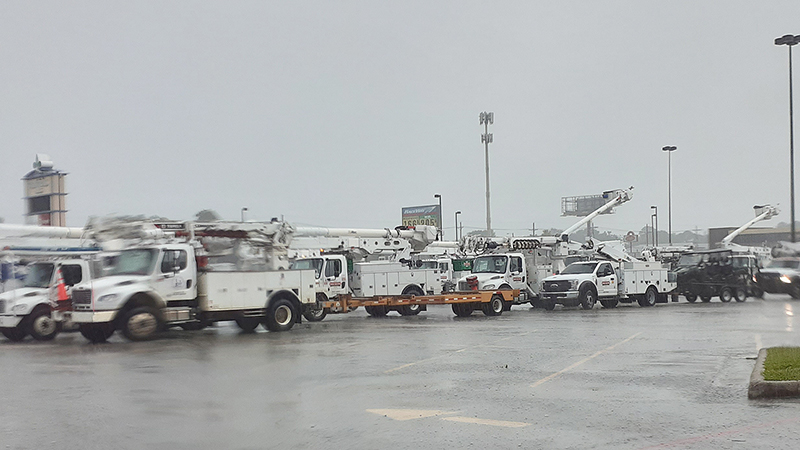 Payne said employees on the ground are often working 16 hours a day, seven days a week.

“Those are long days,” she said. “Plus you have to think about the conditions they are in. They are outside, so it’s a lot of physical work but what they do is also mental. They have to know what they are doing, they have to be present and adhere to safety rules. It’s a long day for those folks, but they will be here until the last light is on.”

Payne said restoration begins with the most critical customers and then moves to the largest cities.

“You really start with hospitals, emergency centers, police and fire departments and things like that first,” she said. “Those resources are really needed so we prioritize that, then we go toward the largest areas and try to restore those as quickly as possible.”

Beaumont and Port Arthur top the list in the Golden Triangle with the smaller Mid- County towns not far behind, officials said.

“I know specifically, for the Port Arthur, Mid-County area, that there are a lot of people staged up at the mall,” Payne said. “There is plenty of workforce in the area focused on getting the lights back on in that region.”

Payne said Entergy is close to being able to give more information to customers regarding a timeline.

“We should have some more information for our customers soon,” she said. “The scouting and damage assessment from (Thursday) are starting to come in. Just know that we are working very hard to get the power back on. We want to do that as quickly and safely as possible, so that people can get their lives back.”

In the meantime, Payne say residents can help the process move along quicker by being cautious of down power lines and clearing streets.

“First and foremost, we know that people are out and about so we still want them to remain cognitive of down power lines and keep their distance from them,” she said. “Second to that, as our crew starts working in neighborhoods with smaller streets, moving cars so that they aren’t congesting the roads helps get those large trucks in quickly.”

Another big thing is safety.

“We are still doing this amid a pandemic,” Payne said. “We just ask people to keep their distance from those that are working. Even during regular times it is best to do that anyways. They do have dangerous jobs, so it’s best to keep your distance from their work zone.”

Shortly after, Entergy returned all customers who were affected by these rotating outages back in service.

Payne said it is a step in the right direction.

“Since (Thursday) we have taken several steps to improve the integrity of our electric grid,” she said. “We have also started up units at the Sabine power station, so we are doing everything we can for people.”