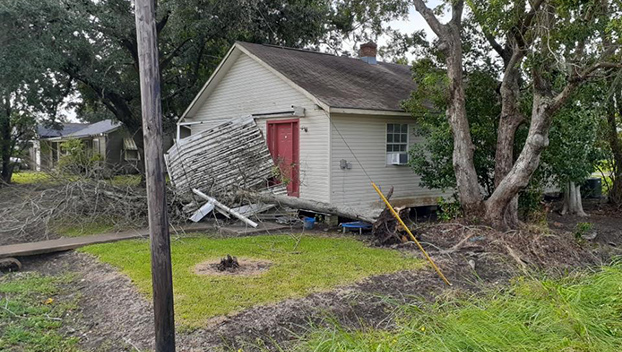 A house on the corner of 10th St. and Helena Ave. in Nederland sustained some damage with fallen limbs and broken shingles. (Courtesy photo)

Hurricane Laura battered the Louisiana-Texas coast early Thursday morning, but a last-minute shift caused the brunt of the damage to miss Southeast Texas.

The biggest concern at daybreak is loss of power, officials said.

Nederland, Port Neches and Groves Emergency Management Teams are already on the ground assessing the damage.

“We are so happy,” he said. “We have several trees down, power lines down and most of the city is without power, but we are so happy that we the missed most of it. We were very fortunate and this is much less damage than Rita.”

“We were out first light and we have all of our crews doing damage assessments,” he said. “I didn’t see any major damage of any structures. That doesn’t mean there weren’t any, but every place I’ve gone the most I’ve seen are loose shingles or some roof damage.”

The city’s biggest concern is removing trees from the roadway, identifying down power lines and removing obstacles from the streets.

“The roads are not bad, only 20 percent of our roads are impassable,” Sosa said. “You can go 12 blocks and then you may have to take a detour. The city is passable with caution, but keep your eyes open for wires and cables.”

While the roads are passable, Sosa said he advises those residents wishing to return to wait until electricity is restored.

“If you come now and don’t need to be here, you may not have electricity for 3-5 days,” he said. “My suggestion is if you don’t have to be here give it a couple of days, let the electricity come back on and you can have air conditioning, food and businesses will be reopened. Right now, 90 percent is without power and we don’t know when that will come back on.”

“The city of Nederland looks great compared to what we thought it would be,” he said. “We have minimal damage and limited down trees, but only 10 percent of the city has power.”

“You can move around town fairly easily with the exception of a couple of streets,” he said. “We fared really well.”

The main concern is the loss of power and minimal services for necessities such as food and fuel.

“That’s the main thing right now,” Morton said. “If you aren’t self-sufficient I would not come back until further notice. There are no shelters open and we do not have an estimate on how long it will take to get the power back on — it could be two days or two weeks.”

Port Neches is in a similar condition to its neighboring cities.

“There really appears to be minimal damage throughout the community,” City Manager Andre Wimer said. “While there are limbs down and some occasional minor structural damage, it’s not anywhere near the magnitude that has been experienced before.”

Wimer said there are not a lot of down trees as in the past.

“The roads are open, although there is an occasional roadway that has debris in the street,” he said. “We’ve seen one or two utility poles that are leaning across a roadway, but the largest issue at this point is the power outage and Entergy is working diligently to restore service.”

A significant part of the area is without power.

“In some areas where you have a lot more trees, there are more limbs that are down but overall, like I said before, the impact of the storm was relatively minor as compared to what we’ve experienced in the past,” Wimer said.

Those wishing to return home should continue to monitor the restoration of power.

“That is the primary consideration people need to take before making the decision to return,” Wimer said. “At this point, we don’t have any sort of time frame from Entergy on when that will be. They do have their crews out and will restore as much power as quickly as possible.”