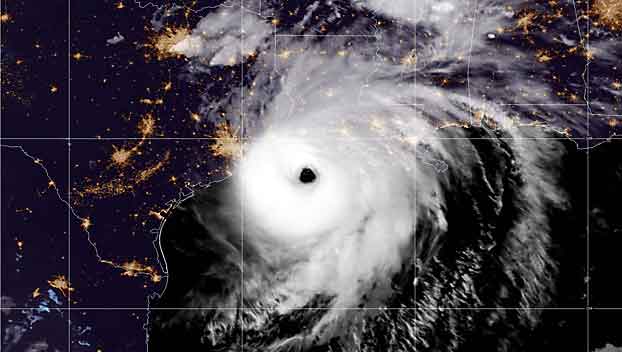 Winds in the Port Arthur area began picking up Wednesday evening as Hurricane Laura grew stronger and moved toward the Louisiana coastline near the Texas state line.

At present Laura is just a few miles per hour shy of becoming a Category 5 storm, the strongest class of storms which begin when sustained winds reach 156 mph winds.

At 9 p.m. the center of Laura was located approximately 90 miles south-southeast of Port Arthur, and moving north-north west at 15 mph, meaning the storm is approximately 6 hours from reaching landfall.

Forecasters expect the storm to begin turning more northerly in the night.

Southeast Texas is mostly hunkered down and waiting to see what Laura’s wrath will bring in the night after evacuations were made throughout the day on Wednesday.

At 9 p.m. the National Weather Service was reporting the winds at the Beaumont Port Arthur Regional Airport has picked up to 22 mph sustained with gusts well over 30 mph. Those winds will continue to increase through the night and early morning, forecasters say with an estimated peak sustained wind expected of approximately 110 mph.