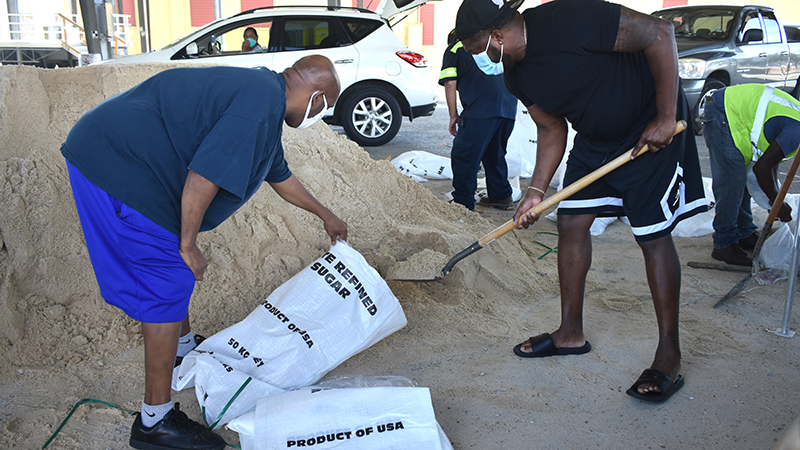 Michael Howard, left, and Thomas Mouton load sandbags. Both men saw flooding during Hurricane Harvey in 2017 and are working to prepare for what is expected to be Hurricane Laura. (Mary Meaux/The News)

For the third day in a row, sand bags were made available to residents of Port Arthur in preparation for a tropical storm or hurricane. 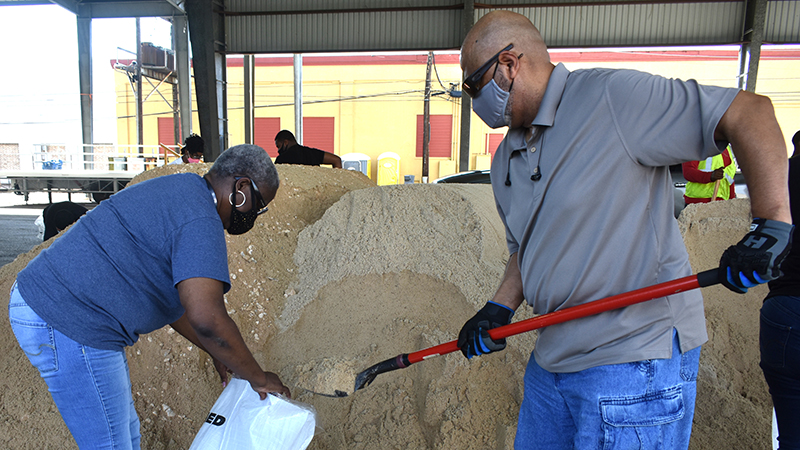 Cheryl and Burke Swallow fill a sandbag at the pavilion on Monday.

On Monday, vehicles snaked from Procter Street near Houston Avenue onto Austin Avenue to the city’s pavilion, where the sandbags were available, five bags for each Port Arthur ID shown.

Residents Thomas Mouton and Michael Howard worked together, one holding the bag open and the other shoveling. Mouton said he and Howard’s homes flooded with Hurricane Harvey three years ago. He hopes this time around won’t be as bad.

Howard was thankful citizens had a chance to get the sandbags to protect their homes. Likewise he is thankful to Port Arthur Mayor Thurman Bartie for keeping residents informed and prepared.

Constance Oliver stood off to the side of the two piles of sand waiting her turn as city workers and residents were busy shoveling.

“I stay behind the water. It flooded really hard with Harvey,” she said of the historical and disastrous storm. “I’m so scared and I’m praying. I’m talking to Jesus. I’m praying right now in Jesus’ name.” 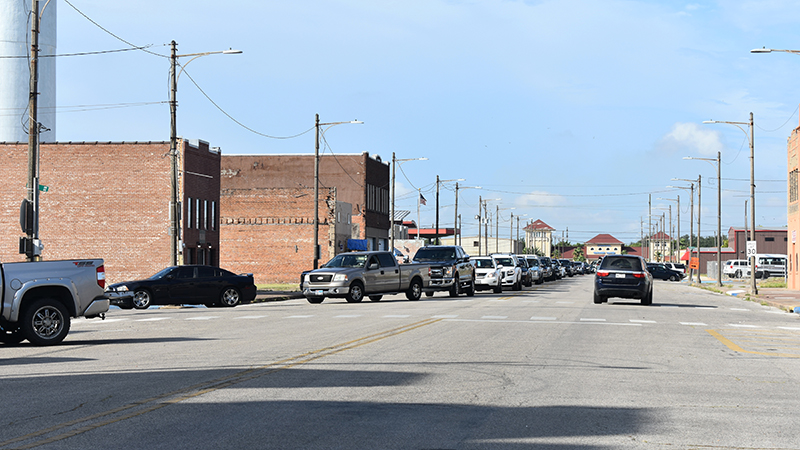 Vehicles are lined up from near Houston Avenue down Procter Street to Austin Avenue to the city’s pavilion where the sandbags were available.

Burke and Cheryl Swallow were also using teamwork to fill their sandbags. Burke works for a refinery offshore and arrived home on Sunday after the rig was evacuated.

The couple didn’t have major flooding with Harvey, only some water in a back room but they are doing all their prep work and have plans for the current tropical weather.

Should Laura, downgraded to a topical storm on Sunday, come ashore as a Category 2 hurricane, they will stay. “If it’s a 3, “we’re out,” he said.

The city of Port Arthur had sandbag distribution at the Bob Bowers Civic Center as well on Monday.

On Saturday, Mayor Bartie called for the voluntary evacuation of Sabine Pass and Pleasure Island. 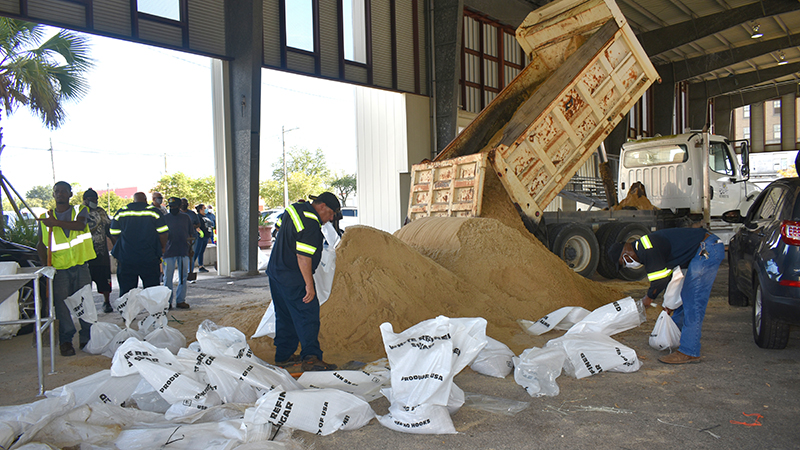 City of Port Arthur employees work as a load of sand is dumped at the pavilion on Monday.

The request is due to those areas having a lower elevation and to the proximity to the Gulf of Mexico,

“It is advisable for these voluntary evacuations to begin now, while travel to northern points may be reached without added weather related obstacles,” Bartie said.

On Sunday, Jefferson County Judge Jeff Branick issued a disaster declaration for the county due to threats from two tropical storms.

The Governor also announced that he has issued a state disaster declaration and has requested an Emergency Declaration from President Trump and FEMA for Public Assistance Category B (Emergency Protective Measures), Direct Federal Assistance, and Hazard Mitigation statewide.