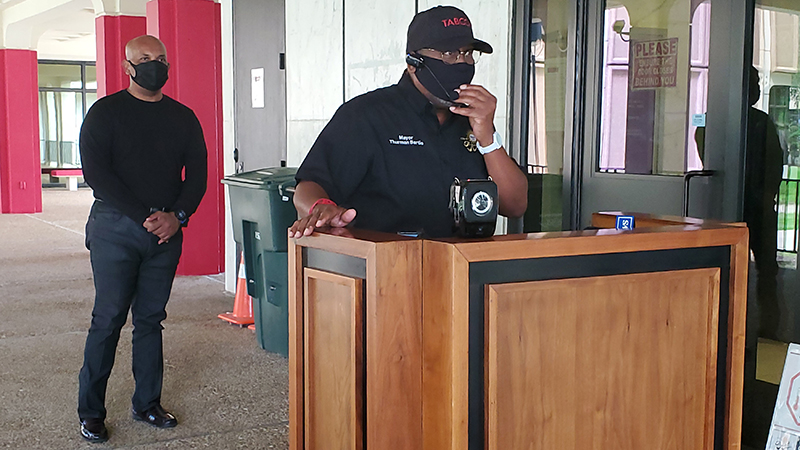 Port Arthur Mayor Thurman Bartie, Saturday at the podium, said Monday morning he would be calling for a mandatory evacuation of Port Arthur beginning at 6 a.m. Tuesday. In the background is PAPD Police Chief Tim Duriso.

Port Arthur Mayor Thurman Bartie says he is calling for a mandatory evacuation from the city starting at 6 a.m. Tuesday as tropical storms Marco and Laura approach the area.

Bartie informed Port Arthur Newsmedia of his decision in a one-sentence text just before 11:30 a.m. Monday. He said he could not go into details as he was in a meeting at the time.

The decision was announced minutes after the Port Arthur Independent School District said classes would be closed Tuesday through Friday. The Nederland ISD closed its campuses for the rest of the week at 1 p.m. Monday.

The request is not mandatory, according to the post.

“We’re more or less saying, if you are retired and you have the finances to where you can leave, take a road trip,” Branick said.

Branick was awaiting more information from the National Weather Service to come this afternoon and planned to hold a conference call with mayors within the county to discuss emergency plans and decide whether a mandatory clearance was necessary. Branick said Bartie has the right to call for a mandatory evacuation within his own city.

“I won’t do anything to try to interfere with that,” Branick said. “There are some instances where the county judge overrules the mayor, but I won’t overrule him.”

Bartie had previously requested that residents in Sabine Pass leave on a voluntary basis because they reside in low-lying areas.

Mayors in Mid-County were waiting to meet with Branick before giving any instructions to their constituents.

Groves Mayor Brad Bailey said his citizens have been instructed to voluntarily leave “if they have the ability and resources to do it.”

“We understand the nursing homes, they can’t pull the trigger unless we issue a mandatory,” Bailey said. “We’re weighing all those options. Our decision will be later in the day. There’s a lot of factors in this one.”

Nederland Mayor Don Albanese said he will know more about his city’s plans following the call with Branick. The Nederland City Council was to meet at 4:30 p.m. Monday, but it would either be cut short or called off for the conference call.

Port Neches Mayor Glenn Johnson said shortly after 1 p.m. it was “way too early” to decide whether an evacuation would be mandatory.

“We’ll know more about it in the morning because of the storm that will get into the Gulf tonight,” Johnson said. “We’ll know the direction much better tomorrow morning, and at that time we’ll make a decision as to what we’re gonna do. Right now, to be calling an emergency evacuation, people can do what they want.”