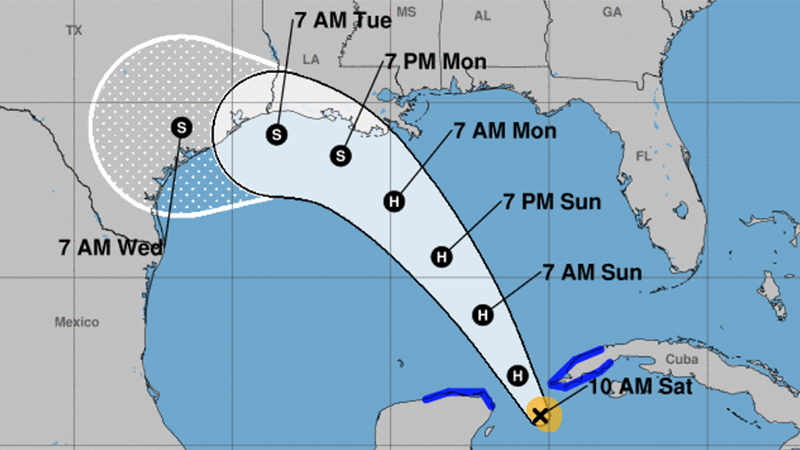 There is still high uncertainty regarding the track and intensity forecast for both tropical storms.

This morning’s forecasts show our region being at risk from both tropical systems.

Tropical Storm Marco is intensifying, and could become a hurricane soon.

It is forecast to be in the southern Gulf of Mexico on Sunday and threaten Texas and/or Louisiana on Tuesday. 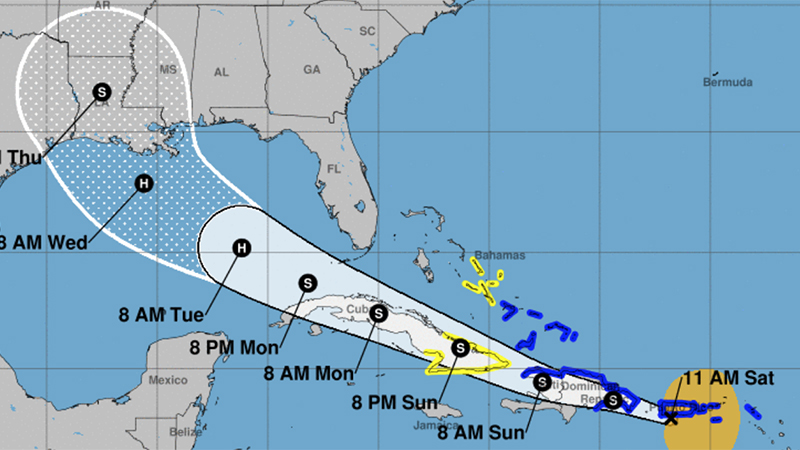 Tropical Storm Laura is forecast to move across the islands of the Caribbean, so it isn’t expected to strengthen until it gets in the southeastern Gulf of Mexico on Monday.

It will become a hurricane in the eastern Gulf and threaten Louisiana by Wednesday.

It is still too early to have any confidence on where the two storms will make landfall, so the following impact points are likely going to be changing over the next few days.

Storm Surge: Since it is possible we could see a category one hurricane in our region, storm surge is typically in the 2 to 8 ft above ground level range, with locally higher amounts, in the Tuesday-Wednesday time frame.

Rainfall: Depending on how fast the tropical systems are moving, rainfall totals conservatively could be in the 5 to 10 inch range, but if either storm stalls or slows down, much higher amounts are possible.

Local school districts — some of which have already begun instruction for the 2020-2021 school year — are keeping an eye on the tropical forecast.

Officials with Port Arthur, Port Neches-Groves and Nederland school districts are all monitoring the tropics as not one but two systems are set to enter the Gulf of Mexico.

Decisions on what to do if and when a storm approaches are in the works.

“The PAISD will continue to track the storm,” superintendent Mark Porterie said. “In the event our community becomes threatened from a tropical storm or hurricane, we will alert our board of trustees and make the necessary decisions. Our maintenance department is on alert and we are in the process of preparing tools to secure buildings and other areas of the district.”

Communication is paramount with the district and since the closing of schools due to COVID-19 earlier this year, communication with parents have become clearer, he said.

“And we have more ways in which to communicate, computers, correct email addresses, correct phone numbers, and emergence call outs,” he said. “We will keep our community informed on school schedule changes as the need arises.”

PAISD students are attending classes virtually for the first four weeks then a decision will be made on whether to extend virtual instruction or go to in-person instruction.

Port Neches-Groves Independent School District Assistant Superintendent Julie Gauthier said the district is monitoring the weather like they would any other event and will closely watch the tropics throughout the weekend to have a better idea of the storm’s path by Monday.

District officials are also keeping in touch with Jefferson County Emergency Management and the forecast.

PNGISD students returned to in-person instruction earlier in the week.

Classes for Nederland Independent School District are scheduled of begin Aug. 31 with a combination of in-person and virtual learning.

There will be a lot of prep work for returning teachers, especially in the week before the new school year begins, he said.

Should the storm continue to move closer to the Southeast Texas coast, decisions will be made.

The peak of the Atlantic hurricane season is upon us and forecasters have upped their predictions saying this year will be an extremely active season.