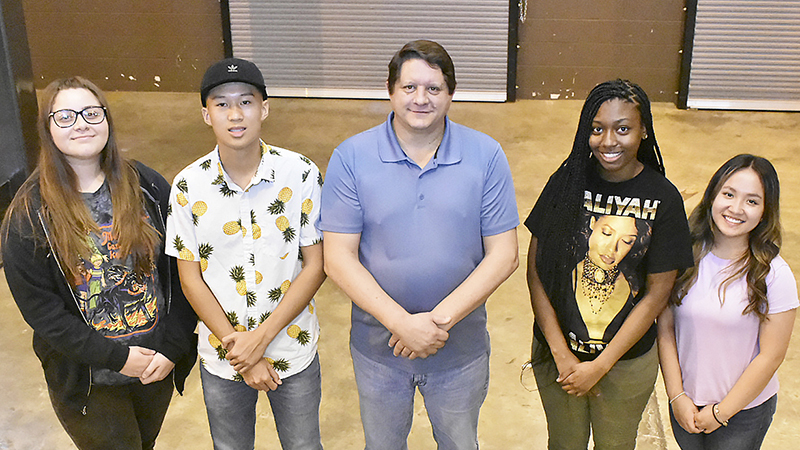 J.C. Caraway (center), vice president of sales and marketing for Robogistics in Port Arthur, stands with four of the five recent interns who are now employees at the company: from left, Jazmin Cabrera, Nam Hoang, Tahleh Evans and Phuong Khuu. (I.C. Murrell/The News) 8-19-20

Nam Hoang was nearing graduation from Memorial High School when he saw an opportunity to gain work experience.

He and six of his classmates took part in an eight-week internship with a Port Arthur technology firm, made possible through its partnership with the Port Arthur Economic Development Corporation.

“It was local, so it wasn’t that far of a drive, especially anywhere,” Hoang said. “I thought it was a good idea for me to join.”

Five of the seven graduates including Hoang are still employed with Robogistics, one week after completing their eight-week term. The other two interns went off to college.

The EDC’s internship program pairs up to 20 students from Port Arthur each year with businesses best suited for them with help from Memorial counselors, EDC Deputy Director George Davis said, although the coronavirus pandemic meant the program faced a tough challenge placing that many in jobs this year. In all, 10 youngsters received internships. 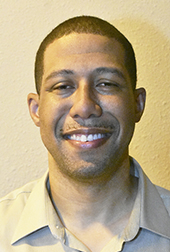 The seven Robogistics employees all matriculated through Memorial’s Career and Technology Education department and start college either this semester or in January. For the five who stayed on, it marks the first time since the EDC began its internship program at least two years ago that a company has retained its apprentices, according to Davis.

“It benefits Robogistics,” Davis said. “That’s part of the incentive. They have to hire from Port Arthur. It worked out well for them because they had openings. With all of those openings, they had kids who matched up in engineering.”

Robogistics helps companies with the concept and design of robotic gantry systems for their material-handling and logistical needs, including palletizing and de-palletizing. Its clients include Sherwin Williams, Bridgestone, Firestone, Dot Foods and Starbucks.

The company has leased a building from the city of Port Arthur on 57th Street for two years, which is how it established a relationship with the EDC, led by CEO Floyd Batiste. 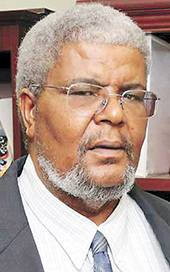 “It’s actually our relationship with George and Floyd,” said J.C. Caraway, vice president of sales and marketing. “We had been part of another company in another location, and they had talked to us about working together back at that. When we started Robogistics, we were looking for a place to start. We were talking with the economic development team here. It makes sense. They helped us finding a location, obviously with Port Arthur having incentive for wanting to have technology here. So, it kind of worked out for both companies that we would come here and start the company.”

In a city that heavily relies on its oil and gas industry, Robogistics has brought a technology dimension to Port Arthur business.

“For one, it gives them perspective,” Caraway said. “Refinery work is so prevalent here, a lot of young people don’t realize there’s other stuff out there. Our objective is to get them a little exposure.”

The new employees have taken advantage and continue in the same positions they held during their internship.

Hoang, a computer science major at Lamar University, works as a sales engineer, helping the design of layouts for gantries that Robogistics assembles and learning how their conveyors flow.

“I also help with calculating how fast the machine can run,” he said. “I also help write proposals to send to companies.”

Jazmine Cabrera is in charge of shipping and receiving.

“I mostly make sure we’ve received every part that we ordered and we have every part we put in a software,” Cabrera said. “I also put in drawings and assembly numbers to help the engineering department.”

“I also helped [Caraway] create sales sheets and I updated their social media and helped them create another social media account to get them more exposure,” she said.

There’s also Phuong Khuu, a chemical engineering major at Lamar whose experience at Robogistics is likely to prove beneficial to her college studies.

She helps out David Hayes in the company’s engineering department and assists the group in altering layouts, tweaking drawings and working on the same software program with Cabrera.

“Working with the engineering department, we have to learn how to work together and problem-solve, which gives me a lot of help in real-world classes,” Khuu said.

“One thing we always say: This is an industrial town. It’s always going to be that,” he said. “The fact is that we know not every kid has aspirations to work in a refinery. It was perfect for Robogistics. It helps the kids gain employment in their own town. We possibly saved five kids from moving to Houston.”